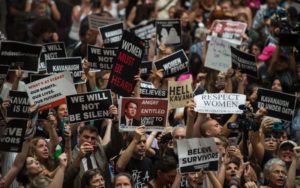 Protesters occupy the Hart Senate Office Building during a rally against Kavanaugh in Washington. /AFP

Washington – Conservative US judge Brett Kavanaugh was confirmed to the Supreme Court Saturday by a razor-thin margin in the Senate, ending months of partisan rancor over his nomination and offering Donald Trump one of the biggest victories of his presidency.

Kavanaugh was sworn in shortly after the Senate voted 50-48 in his favor – a move that cemented the high court’s shift to the right under the Republican leader, who has chosen two of the nine sitting justices.

Protesters rallied in Washington and other US cities against the ascent of the 53-year-old judge, who has faced multiple allegations of sexual misconduct and been criticized for his angry partisan rhetoric.

The prolonged nomination battle has roiled American politics, disrupting the status quo on Capitol Hill and firing up both Republicans and opposition Democrats a month before crucial midterm elections.

The two-vote margin of victory made it the closest Supreme Court confirmation vote since 1881 – and by far the most contentious since Clarence Thomas in 1991.

“This is a historic night,” Trump told supporters at a rally in Kansas after signing Kavanaugh’s commission aboard Air Force One.

“I stand before you today on the heels of a tremendous victory for our nation, our people and our beloved Constitution.”

Trump will host Kavanaugh at the White House for a public swearing-in ceremony on Monday, following Saturday’s formal oath-taking at the high court.