In defense of Magpale, Davide asks critics: ‘What old?’ 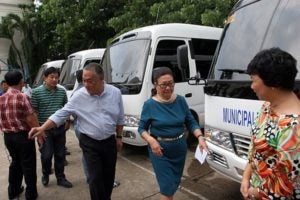 Don’t count her out.

Responding to claims that Vice Governor Agnes Magpale is too old for public service, Cebu Governor Hilario Davide III said her running mate in next year’s elections is still very capable and qualified to serve the people even for the next nine years.

The group described Frasco as “younger and more energetic.”

Davide added that his party’s line up for next year’s elections is already complete.

Read Next
Fortuna: Party still connected to PDP-Laban amid plan to ally with HNP