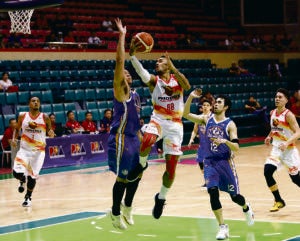 Calvin Abueva of Phoenix penetrates the NLEX defense in a PBA game at the Cuneta Astrodome.
pba images

Phoenix manages to rest stars in blowout win over NLEX

Winning a game by blowout fashion on your birthday is one thing, but Phoenix Petroleum coach Louie Alas is particularly happy about something else.

“Best thing about this is that I was able to rest my major players,” Alas said after a 123-97 destruction of NLEX Wednesday night that also got the Fuel Masters back on the winning track in the PBA Governors’ Cup at Cuneta Astrodome where Phoenix also shored up its bid for a top four berth in the playoffs.

“With this, we won’t have an excuse about being fatigued come Friday,” he added, referring to a critical clash against powerhouse San Miguel Beer, where the Fuel Masters, with a win, could more or less sew up a twice-to-beat advantage in the first round of the playoffs — which would be a first for the franchise.

It was all over right in the first half after Phoenix dropped 71 points on the suddenly listless Road Warriors, playing on cruise control in the final two quarters that got Alas thinking of the Beermen right there.

“We think we need at least two (wins) in our last three games, but if we can upset San Miguel, that would be a big plus (for our twice-to-beat bid),” said Alas, who spent the eve of his 55th birthday reminding his players to brace for a close game against the Road Warriors.

“I definitely did not expect this,” he said of the win, where Phoenix led by as large as 41 points. “It was a good bounce-back game for us. I just asked my players to make sure that we didn’t lose two-in-a-row and now we’re back.”

It was the sixth win in eight games for Alas and his charges, who sat on a 38-point bubble at halftime.

With only a day to rest, Alas knows that they will be in for a tough one against the Beermen, who have lost two straight and will surely be unwilling customers come Friday.

“They are more dangerous considering that they are coming off losses,” Alas said of the Beermen, who haven’t won in two games despite superlative offensive performances from new import Kevin Murphy.