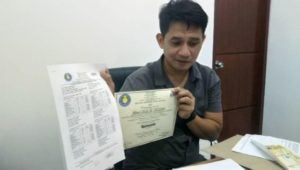 A man who sells fake school diplomas and transcript of records was arrested in an entrapment operation by the Lapu-Lapu City Police Office City Intelligence Branch (LLCPO-CIB) in Zone 1, Barangay Buaya, Thursday night.

The suspect was identified as Edgardo Cuizon, 57, and a resident of said place.

Based on the complaints, Cuizon would collect a fee ranging from P1,000 to P2,500 for the issuance of a fake diploma or TOR.

In an interview, Cuizon admitted that he had been engaged in this kind of business for more than 15 years already.

He, however, said, that he did not offer his services to just anyone. He would only help those who would come to him for assistance in their job applications.