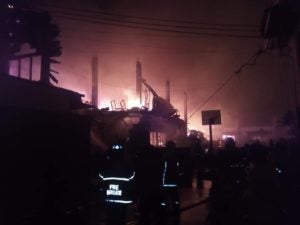 The more than an hour-long fire was believed to have started in a warehouse that stored dried seaweeds before it spread to an already empty warehouse that was located on its left side.

The fire also engulfed a nearby machine shop and a warehouse which stored plastic products.

The compound used to be occupied by the Nissin company that is owned by the Ng family but this has been leased to six different businesses including a Du Ek Sam motorcycle dealer.

Investigators from the Mandaue City Fire Department said that the compound’s tall fire wall prevented the flame from also engulfing nearby homes.

Mandaue fire investigators are yet to determine what could have caused the fire and the damage it caused on affected properties.