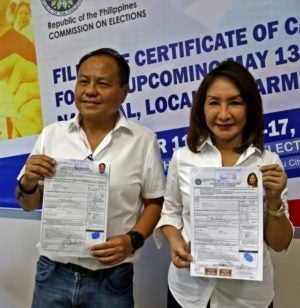 Congresswoman Garcia and her younger brother Pablo John show their certificates of candidacy after filing them at the Provincial Comelec Office.
CDN PHOTO/JUNJIE MENDOZA

Third district Representative Gwendolyn Garcia has formalized her intent to re-claim the highest position in the province as she filed her certificate of candidacy (COC) in time with her birthday yesterday, October 12.

Shortly before 2 p.m., Garcia arrived at the Office of the Provincial Election Supervisor at the Capitol Compound with her brother, Pablo John, who also filed his COC as representative of Cebu’s 3rd district.

“I can run, and I do not run just for the sake of it, I run to win,” said Congresswoman Garcia.

Cong. Garcia made the remark after speculations that she was not allowed to run after the Office of the Ombudsman recently upheld her dismissal from public service and her perpetual disqualification from running for public office stemmed from the unauthorized P24.47 million project to backfill a largely underwater Balili property in Barangay Tinaan, Naga City, that was bought when she was the governor of Cebu.

Garcia is the gubernatorial race standard bearer of the administration party, Partido Demokratiko-Pilipino Lakas ng Bayan (PDP-Laban) and her local party, One Cebu.

However, Garcia has yet to announce her running mate. She said she will make the announcement in due time.

If she will regain the highest seat in Capitol, Garcia said she would focus on infrastructure projects and in promoting Cebu’s culture and tourism.

She slammed at the administration of incumbent Gov. Hilario Davide III, which she cited as her primary reason for wanting to return as governor.

“Well I have seen the province of Cebu has steadily declined from its number one spot when I left it in 2013.”

She also compared the province to the Cebu International Convention Center (CICC), the P800-million project of the province that has now become the temporary shelter of fire victims in Barangay Tipolo, Mandaue City.

The provincial government has sold the establishment to the Mandaue City government for P300 million.

Read Next
Halloween 2018: Heroes and villains at Jpark Island Resort and Waterpark