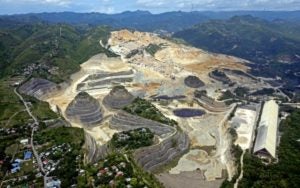 Except for the operations of APO Land and Quarry Corp. (ALQC) in Naga City, Cebu which will remain suspended, the Mines and Geosciences Bureau in Central Visayas (MGB-7) has lifted its suspension order against eight large-scale mining and 15 industrial sand and gravel (ISAG) activities in the region after the companies were cleared to operate by the MGB central office.

MGB-7 information officer Marian Codilla said that the suspension of large-scale quarry operations was lifted last Friday, October 5; while ISAG operations were allowed to resume a week later or yesterday.

“(These companies have ) have either complied or they are about to comply with the recommendations stipulated by the team because they have different situations,” Codilla said.

Codilla, however, warned the firms to comply with all the MGB recommendations, especially those concerning the communities surrounding the area where they operate, even if their operations were found to be safe by the MGB composite teams who conducted the review.

In Central Visayas, a total of 26 large-scale quarry and ISAG operations were suspended at that time.

The operations of ALQC in Naga City remains suspended, pending an on-going investigation conducted by the MGB Central Office.

Residents of Sitio Tagaytay and Sindulan, Barangay Tinaan had blamed ALQC for the massive landslide which resulted to the death of at least 78 individuals while 5 are still missing.

“From what we have known, their report (on the investigation) has now undergone peer review. Since the report is technical, it has to pass all experts reviewing it before it will be released to the LGU (local government unit) and to the public,” said Codilla of the investigation involving ALQC.

Codilla added that aside from MGB-7, other agencies were also investigating other aspects of the Naga City landslide.

Codilla said that MGB-7 will continue to regularly monitor and visit all quarry and mining operations in the region.

“We will monitor every aspect of their operations quarterly especially in their compliance on the safety and health program, social development, environmental programs and projects,” she said.

“We also conduct meetings with the mining companies, while the Multipartite Management Team (MMT), a composite team of an NGO (non-government organization), LGUs, MGB, Department and Environment and Natural Resources (DENR) and Environmental Management Bureau (EMB) is also monitoring their operations,” Codilla added.

Meanwhile, the suspension of operations within the Mineral Production Sharing Agreement (MPSA) of Quarry Ventures Philippines Inc. was also lifted except for the operation in one parcel of its permit area.

MPSA is one of the three modes of mineral agreement between the government and a private individual or company for purposes of mining, as stipulated in Section 26 of RA 7942 or the Mining Act of the Philippines.

Read Next
Lawyers urge Duterte to remain with ICC