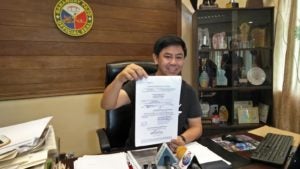 With the support of PDP-Laban, Pajo Barangay Captain Junard “Ahong” Chan is confident that he will win the mayoral race in Lapu-Lapu City.

In an interview, Chan said he already received a Certification of Nomination and Acceptance (CONA) from the ruling party.

Chan is hopeful that it would boost his campaign.

The village chief said most of the Oponganons wanted a change of leadership in the city.