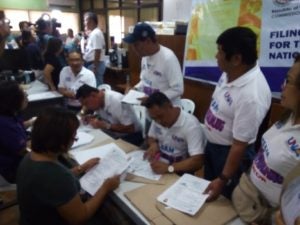 PDP-Laban bet and Pajo Barangay Captain Junard Chan, and his slate filed their certificates of candidacy (COCs) at the Lapu-Lapu City Hall on Tuesday afternoon (October 16).

The candidates were accompanied by Cabinet Secretary Adelino Sitoy.

Another opposition group, led by Rolando Patalinjug, also filed their COCs this afternoon. Patalinjug is the supported candidate of the United Nationalist Alliance (UNA).

Both camps expressed openness to collaborate.