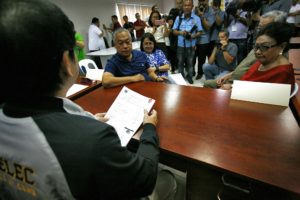 Power Switch. Cebu Governor Hilario Davide III and Vice Governor Agnes Magpale meet at the Provincial Comelec Office on Tuesday to
announce the switch in the positions that they will be running in next year’s elections. Davide will run as vice governor while Magpale will take on Gwen Garcia in the gubernatorial race. | CONTRIBUTED photo

It will be an all-female showdown for governor in next year’s gubernatorial race in Cebu between Vice Governor Agnes Magpale and former House Deputy Speaker Gwendolyn Garcia.

Cebu Gov. Hilario Davide III, who could have sought re-election for his third term in the province, announced on Tuesday that he has decided to give way to Magpale if only to ensure their victories.

The development caught many Cebuanos by surprise although it did not come entirely as a shock to Davide’s political allies who continued to support him even when others had jumped ship to join Garcia’s camp.

In a press briefing after Davide filed his Certificate of Candidacy (COC) for vice governor on Tuesday morning, he said that he and Magpale had to make the switch to protect their allies.

“The past days have been very stressful. A number of allies have left to join the other group because they were pressured, bullied or threatened,” Davide said.

Davide, in an interview last Monday, said that some allies who shifted allegiance to Garcia’s One Cebu–PDP Laban party asked for his understanding on why they needed to leave him.

“It is sad. But I think that is the reality in politics,” Davide said during the interview.

Davide claimed that some of the local chief executives in the province did not voluntarily shift loyalties but were forced to support Garcia’s candidacy due to threats that they will be included in the Duterte administration’s narco-list.

Davide believed that his continued membership with the opposition, Liberal Party, could jeopardize the candidacies of his local allies.

“It’s so easy to concoct such stories. Madamay unya sila (allies), maangin ba kay init baya ang Liberal Party karon (They might be jeopardized because the administration is after the Liberal Party right now),” the governor said.

“Maglisod na unya ta’g defend kay wala tay connection sa Malacañang. Tingali maundang na ni kung si vice gov ang naa sa liderato (We might have a hard time defending them from possible allegations because we don’t have connections in Malacañang. Maybe this will all end if it’s the vice governor who will lead our slate),” he explained.

Davide said it was a wise option for them to be under the leadership of Magpale because “the President has a soft heart for the Almendrases and for the vice governor.”

Davide was referring to the times when during his presidential visits to Cebu, President Duterte publicly acknowledged that he and the Almendrases of Cebu’s fifth district were blood relatives.

Magpale’s maiden name is Almendras; while Duterte’s father, Vicente, the late governor of Davao province, hailed from Cebu and was once the mayor of Danao City.

Duterte’s Cebuano relatives include the influential Durano and Almendras families of Danao.

Davide said the vice governor was in the position to take over the leadership of the province and establish a good relationship with national officials.

“She deserves it. With her experience and dedication and her passion to serve, she really deserves to be governor and there is no better time for her to become governor than now,” said Davide.

“The decision (to give way to Magpale) came without pain and reservation. It is for the best interest of the alliances,” said Davide in a statement.

Magpale accepted the challenge of Davide whom she described as “a man with no ego.”

The vice governor revealed that Davide came to her house on Sunday evening, October 14, where they had an emotional discussion regarding the switch.

“It was a very emotional evening. The offer came from a man with no ego. I am humbled and I accept the challenge,” said Magpale.

“At 76, I am healthy. The knees and the joints may crack every once in a while but my brain and heart are still young. And as far as I know, these two organs are the only ones needed to give a credible, dedicated and passionate service to the people,” said Magpale.

Magpale was optimistic about her chances in the elections as she pointed out a number of Garcia controversies which ultimately led to an order for her dismissal from public service by the Office of the Ombudsman last February.

The anti-graft office cited Garcia for grave misconduct when she was still governor of Cebu for the supposed unauthorized purchase of a P98.9-million Balili property in Naga City in 2008, much of which was later found to be under water.

The dismissal order carried with it an accessory penalty of perpetual disqualification from holding public office. The case is currently pending at the
appellate court.

Interviewed by Cebu Daily News, Garcia welcomed the up and coming competition with Magpale.

Garcia slammed Davide for his accusations that those who jumped ship succumbed to political pressure from her camp.

“It’s an insult to the mayors to even suggest that they succumbed to pressure. Kani nga mayores nakakita sa dako nga deprensya sa ako pa ang gobernador ug sa estado karon sa probinsya (These mayors have seen the big difference during the time when I was governor and the state of the province today),” said Garcia.

“It is a defining statement of how Davide’s leadership has failed and how poorly he has managed the province,” she added.

League of Municipalities in the Philippines (LMP) Cebu chapter president, Tuburan Mayor Democrito “Aljun” Diamante, in a text message to CDN, said that he will support the tandem regardless of who will be the governor and vice governor.

Fifth district Rep. Ramon “Red” Durano VI also aired his solid support for the Magpale-Davide tandem even though he is affiliated with the Nationalist People’s Coalition (NPC) while Davide is running under LP.

Sought for comment, Cebu City Mayor Tomas Osmeña, a staunch supporter of Davide and a vocal Garcia critic, said that he does not want Garcia to return to Capitol because “she will try to destroy the land swap of 93-1,” signed by Davide and Osmeña last August, after close to 30 years of negotiations between Cebu City and the Cebu provincial government.

“Gwen hates the poor in Cebu City,” Osmeña said in a text message sent to CDN. /with Morexette Marie B. Erram

Read Next
Sans memorable quotes or hugot lines, ‘First Love’ is made of moments