‘Barangay 143’ is all about basketball and Filipino culture 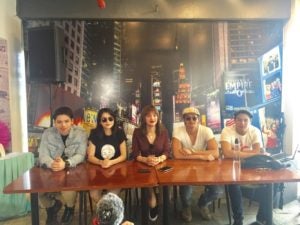 “THIS is a Filipino original animated series and the first in the country.”

Actor Ruru Madrid cited these reasons why viewers should watch “Barangay 143” on GMA every Sunday before “Sunday Pinasaya.”

Other stars who were present during the press conference were Julie Anne San Jose, Kelley Day, Migo Adacer, and pre-show host Arran Sese.

Another reason why viewers should watch this anime series is that it highlights basketball, a sport that Filipinos love.

The characters
Madrid dubs for Wax, the team captain of Blue Valley Lions and the son of Commissioner Jack dubbed by Edu Manzano.

San Jose is the voice behind Vickie, the team manager for Team Pusakal from Barangay 143 and the daughter of Coach B played by John Arcilla.

San Jose said they had vocal coaches for their workshops.

“As much as possible we really want it to be natural. Kasi ayaw namin na hindi kami makilala ng mga tao kung i-iba ang boses,” she said.
Adacer is Brent, a Korean basketball star and will join Team Pusakal.

He has a girlfriend named Jinri, Day’s character.

“Sudden changes will happen in his life and force him to go to the Philippines and find himself and go for soul searching,” he said.

Adacer said he can relate to Brent’s character since he, too had to learn to speak the
Filipino language.

The young actor was raised in Sydney, Australia.

In 2015, he joined the sixth season of the talent search “StarStruck” and was named the Ultimate Male Survivor.

“Englisero ako dati, as in zero Tagalog,” said the young actor, who has learned to not just speak the language but also adapt in Philippine showbiz.