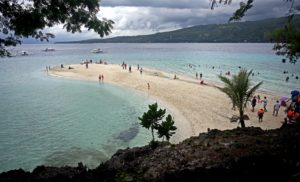 The Sumilon Island sandbar, which is shown in this April 2018 photo, is among the tourist destinations of Oslob town in south Cebu. (CDN PHOTO/LITO TECSON)

Steps have already been taken for Oslob town, a tourism hotspot in southern Cebu, to avoid suffering Boracay’s fate.

Regional Director Shalimar Tamano of the Department of Tourism in Central Visayas (DOT-7) cited in a phone interview on Monday these steps to address similar issues that led to the temporary closure of Boracay at least six months ago.

Tamano also said this with the Boracay reopening later this week and Tourism Secretary Bernadette Romulo-Puyat’s statement about sending “love letters” to at least five other major tourist destinations in the country which included Oslob town in south Cebu.

Oslob is a popular tourism destination in Cebu mainly because of its whale shark watching activities, Sumilon Island, and Tumalog Falls.

According to Puyat, her “love letter” should serve as a reminder to local government units and business establishments to strictly follow environmental laws, especially the easement rules for beach fronts and shorelines.

“Without us telling, they’re following the easement. So that’s nice to know that a lot of them have already (done it) on their own voluntarily,” she said in an earlier report.

Tamano said that they had been meeting with the local government officials of Oslob together with the Cebu provincial government in addressing tourism-related concerns in the famous town.

Among the solutions agreed by the technical working group (TWG) composed of the representatives from different sectors, was the limit of the number of tourists watching and swimming with whale sharks to half in a day.

From an average of 1,000 tourists flocking the attraction in Barangay Tan-awan, it should not anymore exceed 500 a day.

The activity generates around P1.2 million in income a day.

“The trick here is to reduce to half the number of tourists. But at the same time, we have to maintain the income generated so it will be the same. It is possible to increase the fee but there should be improved services for the tourists,” Tamano told Cebu Daily News.

For example, he said the local government unit might provide free T-shirts or bottled water for each tourist coming and paying with a higher fee.

Facilities like shower rooms, or comfort rooms can also be improved to make sure that tourists get a added-value from the higher fees they have to pay.

“The purpose of tourism is employment. It’s not just to entertain people. There should be income and sustainability. And then there should be customer satisfaction,” he added.

Tamano said they would continue discussing the details of this with the TWG in their coming meetings.

The target for implementing the limit on visitors and other agreed upon solutions is December this year.

To recall, the local government unit of Oslob had already implemented their own clean-up efforts which included the one-week closure of the Sumilon Island sandbar and the Tumalog falls.

According to Secretary Puyat, the other areas they had sent “love letters” include El Nido in Palawan, Panglao in Bohol, La Union, and Baguio City.

The world-famous Boracay Island is reopening on Friday, October 26 after a six-month closure implemented by the government to give way to clean up and rehabilitation efforts.

Meanwhile, some airlines have already started opening flights back to Kalibo and Caticlan for the reopening of Boracay Island.

In an advisory, Cebu Pacific reminded passengers with booked flights to Kalibo and Caticlan that they will be requested to show proof of confirmed hotel and bookings before entering the island.

“Only guests with confirmed reservations at any of the accommodation establishments that are compliant with the requirements of the Department of Tourism, Department of Interior and Local Government, and the Department of Environment and Natural Resources will be allowed to enter Boracay Island,” read the advisory.

They advised their passengers to check if their chosen hotel or resort are among those certified compliant and permitted to operate starting October 26.

Read Next
A LOOK BACK AT THE 2008 CESAFI FINALS