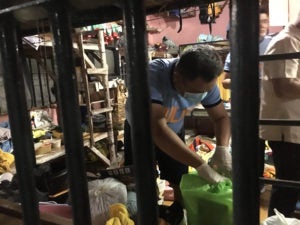 WHILE no illegal drugs were found in Friday’s greyhound operation at the Talisay City Jail, the police are still wary about the number of cellular phones and the amount of money that were confiscated during the early morning raid.

Regional Office in Central Visayas (PRO-7) director, Chief Supt. Debold Sinas said that the P260,000 cash and the phones are proof that the trade of illegal drugs is still flourishing inside the jail.

(We recovered cash of different denominations. Accordingly they have an authorized store inside the jail. But cash is prohibited inside a jail facility because if there is money, there is a possibility that there are illegal transactions.)

Sinas claimed that the flow of transaction of illegal drugs outside is mostly run by drug personalities who are detained inside jails.

(That’s the reality. Around 60 percent of the transactions of illegal drugs outside are mandated by those who are inside the jails.)

The surprise operation, according to Sinas was fueled by reports from the Talisay City Police Station that some arrested drug personalities claimed that their sources of the contraband are inside the city jail.

In a separate interview, Awe believed that jailed drug personalities are still doing their illegal trade.

Awe, however, refused to divulge the names of the detained drug pushers, saying they are still conducting investigation together with the police.

(During our greyhound operations in the past, we were able to confiscate shabu. Now, we need the help of the PNP.)

At least 600 personnel from PRO-7 conducted the operation from 4 a.m. to 6 a.m. alongside agents of the Philippine Drug Enforcement Agency in Central Visayas (PDEA-7).

Aside from the cash and phones, the police were also able to confiscate improvised and bladed weapons.

Read Next
SuGod program to help soon to be free inmates