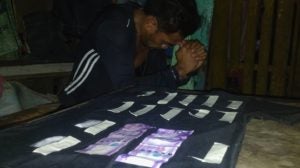 Arrested were Mary Joy Aro, 37, a resident of Sitio Plus in the same barangay; and Rolando Ocampo, 37.

Cheif Insp.Regino Maramag, precinct commander of Pardo Police, said that they had difficulty in arresting Aro because she kept on transferring from one place to another.

Aro in an interview admitted that she engaged in drug dealing.

Police seized suspected shabu with an estimated worth of P232,000 from the arrested persons.