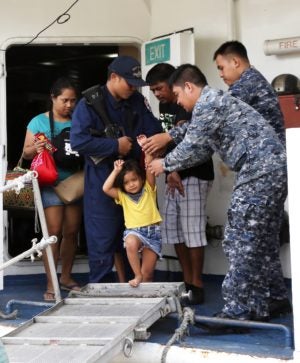 Some of the 69 passengers including children were rescued by Philippine Coast Guard personnel on board 4404 Vessel after the vessel they boarded MBCA Meme 5 encountered engine trouble at the seawaters of Gilutongan, Cordova while on its way to Getafe, Bohol.
CDN PHOTO/ JUNJIE MENDOZA

Queenie Ann Sueño was excited to return to her hometown in Getafe town in Bohol on Tuesday for All Saints’ and All Souls’ Day.

But fear drowned the 24-year-old mother’s excitement when the motorboat that she and her family were boarding started to sink in the waters off Gilutongan Island, Cordova town on Tuesday morning.

(The children cried so hard. We were really scared because we do not know what will happen to us since we were in the middle of the sea),” Sueño told Cebu Daily News as they were transported from the port to the Rural Health Unit (RHU) of Cordova to be checked.

Sueño was with her husband Virgilio, and two sons aged 2 and 5 years old. Sueño is also seven months pregnant with their third child.

The family was on board MB Meme 5 with 65 other passengers when the incident happened.

(We already heard a loud bang while we were still at port but the boat proceeded with the trip. We did not mind it since we are also excited to go home. When we were in the middle of the sea, we were told by the crew to wear life jackets. The sea water started to fill the boat and it started to sink.)
MB Meme 5 which was bound for Getafe, Bohol left Cordova port at 7:10 a.m.

Julian Legas, Cordova Municipal Disaster Risk Reduction and Management Office (MDRRMO) head, said they received the information on the distressed motorboat at around 7:40 a.m. which they immediately relayed to the Coast Guard substation in Mandaue City. They also deployed their own motorboat to rescue the passengers.

Legas added that all passengers and crew listed in the motorboat’s manifest are safe and accounted by the rescue groups.

Dagalea said the owner of the motorboat provided for the meals of the passengers and facilitated the transport of the victims from Cebu to Bohol.