‘LET THE TRUTH COME OUT’ 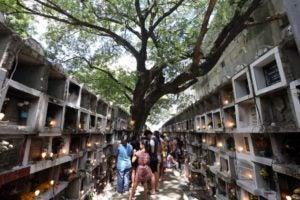 FEWER people visited cemeteries in Cebu during this year’s observance of All Saints’ Day and Souls’ Day. The Carreta Public Cemetery in Cebu City, which is normally packed during these two days, has fewer visitors on
Nov. 1-2, 2018.

Cebu Archbishop Jose Palma on Friday expressed full support for the Senate inquiry into the series of killings in the island, saying the truth must come out and justice must be served to the families of the victims.

“We know that there’s a series of killings, and it has alarmed us,” he said in an interview.

“It’s sad enough when a member of a family dies, and it’s even more sad when they die without valid grounds,” the 68-year-old prelate added.

The Senate Committee on Public Order is now working on the final schedule of the Senate inquiry, which was requested by the minority bloc allied with the Liberal Party and Sen. Grace Poe.

Palma, however, advised the people to not make any conclusion while the investigation is still unfolding.

“It’s complicated to judge who are behind these killings and where it stems from,” he said.

But if the murders were intended to eradicate illegal drugs in the community, Palma said killing people, even including those involved in the narcotics trade, will never solve the problem.

“This (killing people) is not the answer to our problem on illegal drugs. No number of killings will ever end the drug menace because there is more to the death of a person than just illegal drugs,” said the chief shepherd of the largest archdiocese in the country with close to four million lay Catholics and about 600 priests. 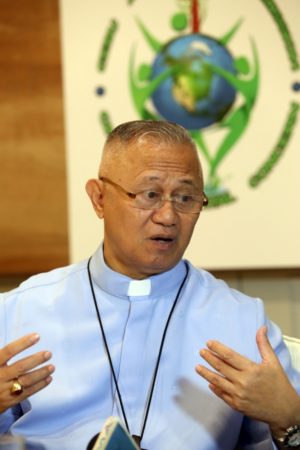 In August, Palma called for a special prayer to put an end to the killings, but these continued.

Palma appealed to Cebuanos not to lose heart and to keep on praying as bodies piled up on the streets of Cebu City and province almost every day.

“I hope the Lord will answer our prayers in due time. We continue to hope that the consciences and hearts of those behind these murders will be touched,” he said.

A tally made by Cebu Daily News showed that at least 198 persons have been killed in Cebu from February to Oct. 12.

Of the number, 47 were killed in police operations while the rest were gunned down by unknown assailants.

Most of these murders remain unsolved, with the majority of the victims being linked to the illegal drug trade. Some Cebu policemen had been linked to at least three separate shooting incidents in the past three months.

Chief Supt. Debold Sinas, director of the Central Visayas police, on Wednesday admitted that some policemen have been moonlighting as hitmen for drug personalities.

He said they were now in the process of investigating and identifying these policemen, as they are destroying the image of the Philippine National
Police as an organization.

Palma appealed to these policemen to revisit their consciences, hoping that they will be enlightened and cease taking the lives of people.

“It’s very sad to think that for an amount of money, you kill a person. I remind you to heed your conscience. There are people who, despite temptations, stood firm for what is right and good,” he said.

Meanwhile, Supt. Wilbert Baliguat, chief of the Investigation, Detective, and Management Branch (IDMB) of the Cebu City Police Office (CCPO),
believed the killing of five persons in Barangay Malubog, Cebu City last Oct. 4 will be among the incidents that will be highlighted in the Senate
inquiry.

“We are ready to open our investigation particularly the Malubog incident,” he said.

Baliguat said they recently found out that one of the firearms recovered from one of the five slained persons in Barangay Malubog was owned by an
official of a government agency.

“We are now coordinating with the said agency to find out why the firearm was in the possession of one of the victims,” he said.

Baliguat refused to divulge the name of the government agency while the investigation continues.

Senior Supt. Royina Garma, CCPO director, said they will continue their investigation into the Malubog killings.

In an earlier interview, PNP chief Director General Oscar Albayalde said they would not hide anything should a Senate probe push through on the rise in killings in Cebu.

The PNP is not hiding anything,” Albayalde said in a press conference in Camp Crame.