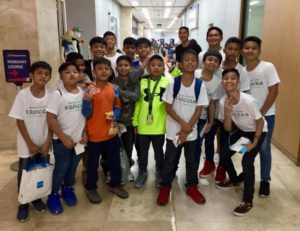 UV’s young ballers are all set to compete in the SBP division.
contributed

THE UNIVERSITY of the Visayas (UV) and SHS-Ateneo de Cebu seek glory in the SBP and Passerelle divisions as they compete in the 33rd SBP Paserelle Twin Tournament backed by Milo Visayas Regional Finals today at the Bacolod Tay Tung High School in Bacolod City, Negros Occidental.

UV will be carrying the flag of Cebu in the SBP division. The team is composed of the core of the team that recently won the title in the under-12 division of the Cesafi.

With the Green Lancers coming off a collegiate title, UV team manager Gerald Anthony “Samsam” Gullas has high hopes for his young ballers.

“Year in and year out they have proved that the system put in by coach Ronald (Bucao) and Michael (Bucao) can win multiple championships. We may not be the biggest team physically, but what our little boys lack in height, they make up for their heart and will to win every ball game. I think they have proved that over the years,” Gullas said before flying off for his honeymoon.

UV will be up against St. John’s Institute, Hua Siong College and the Colegio de la Purisima Concepcion.

Ateneo de Cebu, on the other hand, will be vying in the Passerelle division where they will be competing against Bacolod Tay Tung, St. Robert’s and HERCOR College.

The champions of this tournament will qualify for the national finals that will be held in Pampanga on November 24 and 25.