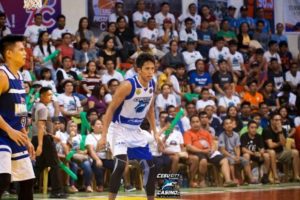 The Cebu City Sharks-Casino Ethyl Alcohol continued their climb in the South division as they won their fourth in-a-row after surviving the Pasig Pirates, 56-53, in the Maharlika Pilipinas Basketball League Datu Cup at the People Center in Bataan.

The Sharks scored a single point in the last five minutes of the game but still managed to hack out the victory and boost their win-loss record to 5-8.

The Pirates actually had a shot at tying the game after veteran forward Jerwin Gaco fished a foul on Sharks big man Rhaffy Octobre with eight seconds left.

However, Gaco missed both, which eventually led to split charities from Cebu City guard Harold Cincoflores for a 56-53 Sharks lead with four ticks remaining.

The Pirates’ misfortunes continued as they turned the ball over on their next possession but Sharks missed a chance at sealing the win after Cincoflores missed two free throws.

The Pirates rebounded the ball but weren’t able to get a clean shot off as time expired.

Octobre led the Sharks with a double-double performance of 10 points and 12 rebounds.

Gayford Rodriguez has proven to be a great addition to the team, scoring 10 points and pulling down nine boards.