It was early morning of November 8, 2013, when their lives changed after Super Typhoon Yolanda (international name: Haiyan) battered northern Cebu and the rest of the Visayas region.

With the blink of an eye, what they called home for 13 years in Barangay Lawis, San Remigio town was totally gone.

Five years after, couple Bethoven Olivar Sr., 48, and Alma Olivar,49, have proven that the super typhoon was not just a test of faith for their family but an opportunity for new beginnings.

The couple with their five children, John Roland,25; Shaira, 23; Kristine Joyce, 22; Bethoven, 19; and Lovernessa,13 are now living in a new house in the same village.

“Mas nakabangon nami karon (Our situation is now better), ” Alma smiled as she faced Cebu Daily News during a visit to the town last weekend. 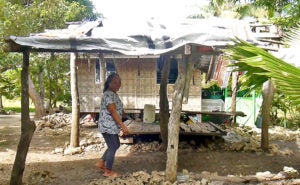 The Olivar’s house was among 5,288 houses that were totally damaged in San Remigio at the height of Super Typhoon Yolanda.

The couple recalled that a portion of their concrete wall began to collapse when strong winds pounded heavily on their town.

The Olivar family ran for their lives and took shelter in a nearby house.

Since they lost their house, the family set up a temporary shelter using old wood as pillars and a tarpaulin for their roof.

They stayed there for eight months.

“Mura gyud me og mga baboy ato (We were like pigs),” recalled Alma saying that there were days when she would sleep on the ground outside with a sack just so her children could sleep better in the tiny shelter.

It was in July 2014 when the Olivars were chosen by the International Organization for Migration (IOM), an inter-governmental organization as among the organization’s 31 housing beneficiaries.

In just three days, with the help of IOM, a bungalow made of bamboo quickly rose beside their damaged house in Barangay Lawis.

“Dako kaayo mi og pasalamat nila (We are so grateful to them),” said Alma.

While private institutions like IOM had been able to immediately complete and turn over new shelters to those affected by the super typhoon, the pace is much slower on the side of the government.

As of October 19, 2018, only 350 housing units in two sites within the town were undergoing construction; while land development and housing construction for the remaining 874 units had yet to begin.

To address this, he said an agreement (MOA) was entered into by NHA and San Remegio local officials to download the housing funds allotted for the town so that the local government itself could conduct the procurement process for a
project contractor.

Rebuilding homes
For people like Bethoven and Alma, whose homes were destroyed by a natural disaster, shelter is one of their biggest needs to start rebuilding their lives.

The government recognized this need by allocating funds and pushing for the implementation of housing projects in affected towns all over the country, including Cebu.

In Central Visayas, NHA-7 allocated a total of 22,423 housing units in affected towns on mainland Cebu, and on the islands of Bantayan and Camotes.

Out of the number, only 1,787 units were completed by the agency while 3,355 units are currently still being built as of October 2018.

Construction has not started at all for the remaining 17,281 units.

NHA-7’s Figuracion admitted that there have been a lot of challenges in implementing the Yolanda housing projects.

“Most of the Yolanda projects in northern Cebu have just been bidded or lately bidded. Because one of the major requirements from the contractor to bid for a contract is to have a titled property in a residential zone — something which contractors are having a hard time to produce,” he told CDN.

The fact that lots in Bantayan and Camotes Islands remain mostly classified as unalienable and undisposable also adds to the burden.

In Bantayan Island, all three towns of Bantayan, Madridejos, and Santa Fe are beneficiaries with an allocation of 9,518 units.

In Camotes, all of the 3,153 housing units intended for the towns of San Francisco, Poro, Tudela, and Pilar have yet to begin construction.

NHA-7 has executed several MOAs with the different towns and local officials for the transfer of Yolanda housing funds to the local government units in sites where NHA-7 has not started the procurement process.

For those that have been bidded out by NHA-7 and are undergoing either land development or actual housing construction, the agency will be the one to see through the project’s completion, said Figuracion.

Once the houses are completed, NHA-7 will turn over the units to the concerned local governments who were the ones that identified and screened the actual beneficiaries.

Aside from the actual Yolanda victims who lost their houses in November 2013, local government units have also
included families living in hazard zones like shorelines in their list of
beneficiaries.

Moving ahead
For their part, the Olivar family is thankful that they were immediately able to rebuild their house and their lives
after Yolanda.

In place of the trees that were uprooted by the strong tropical cyclone, pineapples, bananas, mangoes, and coconut trees are now growing in their backyard. 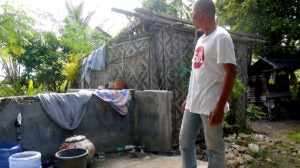 The Olivars said that they have learned their lesson to be always prepared as the super typhoon has caused them trauma.

“Labi na og kusog ang hagin, makuyawan gyud ko (Especially when there is a strong wind, it gets me worried),” she said.

Alma told CDN that their family overcame the tragedy because they understood and helped each other.

The children were also encouraged to finish schooling so that they could help their parents. 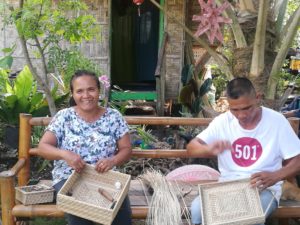 Alma Olivar (left) and Bethoven Olivar Sr. (right) talk about how they move on from super typhoon Yolanda. (PHOTO BY CHRISTIAN MANINGO)

The Olivar’s now earn a living from selling “hapao”, a basket made of rattan and buri.

A large basket sells for P90 each while a small basket is priced at P25.

The family’s livelihood has helped their two children John Roland and Kristine to finish their studies.

John Roland, a beneficiary of the Expanded Students Grants-in-Aid Program for Poverty Alleviation (ESGP-PA) of the Department of Social Welfare and Development (DSWD) finished Bachelor of Science in Tourism at Cebu Normal University – Medellin Campus.

Aside from selling native baskets, the couple have found other ways to earn for their two other children who are still in school.

Alma works as a house helper and earns P3,000 a month while her husband Bethoven works as a barangay tanod who earns P2,700 monthly.

Figuracion admitted that while it has been quite some time since Yolanda ravaged northern Cebu, yet government housing projects remained far from done.

With help from local government units, NHA-7 hopes to be able to complete these projects while ensuring that these will be livable.

The NHA houses may no longer serve as immediate shelters for those who had lost their homes; but calamity victims continue to hope that soon they can call these structures their own as they move on and weather other calamities that may come their way.