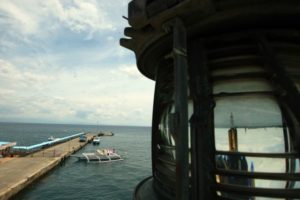 The Toledo City wharf as seen from its lighthouse.
CDN PHOTO/TONEE DESPOJO

The Provincial Board has rejected an ordinance of Toledo City supposedly allowing small-scale commercial fishing activities within its waters, particularly 10.1-15 kilometers from its coastline.

It was then forwarded to the Provincial Board for mandatory review, since Toledo City is a component LGU of the province.

In the report of the Provincial Board’s Committee on Environmental Conservation and Natural Resources obtained by Cebu Daily News on Friday, the committee said the ordinance contradicted existing Philippine environmental laws.

“It must be borne in mind that the Toledo City waters is under the Expanded National Integrated Protected Areas System (E-Nipas) so the control is not with the City but with the Department of Environment and Natural Resources (DENR), and the management of the protected area is placed under the Protected Area Management Board (PAMB),” the committee report dated October 30, 2018 read.

The seas of Toledo City is part of the Tañon Strait Protected Seascape (TSPS) which is protected by the E-Nipas Act of 2018.

TSPS is the largest protected area in the country.

Under the law, only small scale fishing using boats with gross weight not exceeding 3 tons will be allowed in the area.

The PB’s decision has been lauded by environmental groups, Oceana and Philippine Earth Justice Inc.

In a statement sent to CDN, Oceana Philippines Vice President, lawyer Gloria Estenzo-Ramos said the “decision is a victory for the families of the more than 43,000 municipal fisherfolks of Tañon Strait who depend on this ecosystem for their subsistence.”

“Commercial fishing inside a protected seascape is not allowed under our laws on marine protection, otherwise fishery and aquatic resource in Tanon Strait, which has an approved management plan, will be decimated,” Estenzo-Ramos added.

Lawyer Rose Liza Eisma-Osorio also said the board’s decision is a benchmark ruling that will prevent other LGUs from crafting similar legislations.

“It was an illegal ordinance. And the Cebu board’s decision is a compelling action that effectively stops other coastal cities and municipalities from crafting similar ordinances allowing commercial fishing in the Tañon Strait Protected Seascape and even in other municipal waters, until they comply with the rigid standards of the Fisheries Code,” said Eisma-Osorio, managing trustee of Philippine Earth Justice Center.