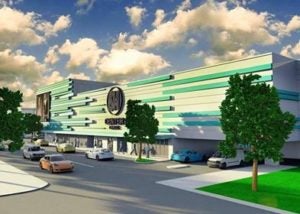 This is an artist’s perspective of the SM Center Ormoc, which will open on Friday./CONTRIBUTED PHOTO

GIMBOH Ponce has been passing by Real Street in Ormoc City ever since he could remember.

The native of Ormoc City, Ponce, 32, recalls an empty lot in between the Anilao and Osmeña Bridges in Barangay 14.

Across the lot was a mini-mart where his mother used to take him for groceries until in 1995 when it closed when Gaisano Ormoc opened.

On Friday (November 16), just in time for the holiday season, the area will no longer be an empty lot as Ormoc welcomes SM Prime Holdings Inc.’s (SMPHI) 72nd mall, its seventh in the Visayas region, and its first mall in Eastern Visayas.

“The presence of SM here or the rise of malls (in this city) will definitely change the economic landscape of Ormoc since Ormoc is the entry point of tourists coming from neighboring municipalities and cities in Leyte,” said Ponce, a registered nurse and licensed professional teacher.

In his high school years from 1999 to 2003, Ponce’s malling adventures were limited to the Gaisano Department Store.

With the entry of SM – after Robinson’s Place Ormoc–Ponce said Ormocanons now have the chance to enjoy the stores and amenities of a mall that only Cebu could offer before.

Ormoc is the second largest city in the Eastern Visayas after Calbayog City in Samar.

“The city enjoys economic growth because it supplies a large part of the country’s power needs with its abundant geothermal power from the Tongonan Geothermal Power Plant in Barangay Tongonan and the neighboring Kananga town,” SMPHI said in a press release furnished to Cebu Daily News.

In the statement, SMPHI noted that Ormoc City is the gateway of three major economic contributors in the country and the Visayas region, which are located in the town of Isabel, 49.5 kilometers from Ormoc.

These are: the Leyte Industrial Development Estate; the Philippine Phosphate Fertilizer Plant, the largest fertilizer factory in Asia; and the Philippine Associated Smelter and Refining Company, the country’s biggest copper processing plant.

The mall design was tied in to the Anilao River, which flows right behind the complex.

The concepts feature varying shades of green with attention given to a balance between vibrant and serene patterns highlighting the modern exterior.

Attention was given to bring in natural light to the mall’s interior.

SM Center Ormoc has ample parking in three levels: 426 for cars, eight slots for persons with disabilities and 133 motorcycle slots.  It also has 12 terminal slots on the ground floor.