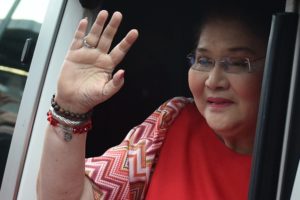 The Sandiganbayan on Friday allowed former First Lady Imelda Marcos to post P150,000-bail and enjoy temporary liberty while the court decides on her motion for leave despite the anti-graft court’s decision convicting her on seven counts of graft.

On Wednesday, Mrs. Marcos filed a motion for leave to avail of post-conviction remedies, citing health factors as a reason why she was unable to attend the promulgation of her cases last November 9.