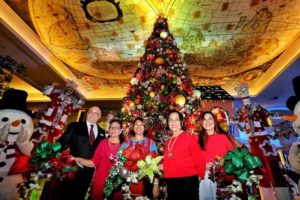 As the Christmas season draws near and with children Christmas carolers beginning to converge on Cebu City’s busy streets, the
Cebu City Police Office (CCPO) has also started to also go after these minors.

Chief Insp. Arieza Otida, CCPO public information officer, said the roundup is necessary as these minors are taking risks to their safety and even endangering commuters as well as drivers when they suddenly climb on public utility jeepneys (PUJ) and cross busy streets to ask for money and other goods from commuters this holiday season.

That is why all police stations in the city were directed to conduct rescue operations, which started in the evening of Thursday, November 15.

(The conduct of rescue operation of minors was decided after we saw an increase of children loitering on the streets especially that Christmas is just around the corner and these children are using it to make a living.)

Otida said that this time of the year, children are out caroling on the streets, to the point that they will run after jeepneys.

(They are categorized as ‘children at risk’ because they are on the streets instead of being in their
houses or in school.)

The conduct of rescue operations of Cebu City policemen is also in relation to Children’s Month, which is celebrated every November, said Otida.

But Otida said that the rescue operations will continue even after the Children’s Month.

(Actually these children are mendicants. And our director directed all police stations to conduct roundup operations as a way to help these children.)

The policemen have been instructed to pick up children past 10 p.m. and those caroling in the middle of traffic to avoid accidents.

Since the police could not detain them, rescued children will be referred to social workers for proper intervention.

On Thursday, the city police rescued at least 60 minors from different parts of the city.

Otida said that the Carbon Police Station had the biggest number of minors that were rescued, or 12 minors.

(We had conducted profiling on these children and then we turned them over to the GAD focals of every barangay.)

The CCPO admitted that rescuing minors or taking them off the streets has been their problem since there is no clear program for these street children.

Otida said that when they rescue these children, the protocol is to turn them over to social welfares officials and then to their parents.

But since there is no clear program and proper monitoring system for these children, they keep coming back to the streets.

(It’s already a vicious cycle. We keep on rescuing them, turned them over to GAD or to their parents. It’s going around in circles.)

She said that helping these children so that they could be taken off the streets needs the cooperation of the public and other government agencies that cater to these children.

The Department of Social Welfare and Development in Central Visayas (DSWD-7) declined to issue a statement pending a clear policy from the regional office.

Kerwin Macopia, DSWD-7 information officer, said he and other officials of the regional office have yet to discuss the matter.

“Murag magbuhat sa mi ana. Dili man pwede kon ako ra (I think we will have to make a statement on that. I cannot speak in behalf of the agency [without discussing it first with the agency’s regional officials],” he said.