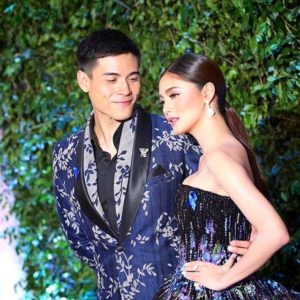 KIM Chiu has admitted that she and actor Xian Lim are in a relationship.

Chiu confirmed her relationship with Lim during an interview with the King of Talk Boy Abunda during an anniversary episode of “Tonight With Boy Abunda” on Wednesday, November 14.

But the King of Talk persuaded her and asked a follow-up question, “But you never said that ‘yung ‘yes.’ Kimmy, Xian, are you officially together? What’s the answer?”

Before confirming their relationship, Chiu said it was hard for her to answer even though she is 28 years old already.

Chiu and Lim first worked together in romantic-comedy TV series, “My Binondo Girl” in 2011.

Fans eventually named their tandem “KimXi.” The team-up was formed after Chiu and then real and reel loveteam partner Gerald
Anderson broke up in 2010.

Is Lim the ideal guy for Chiu to marry?

When asked why, she answered, “Hindi ko din alam.”

Chiu revealed said they have not talked about marriage yet.