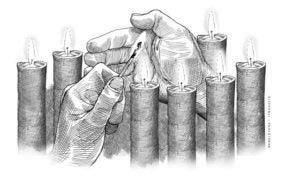 I just turned twelve when this happened and in first year high school.

I read an item in a newspaper about the end of the world, which fixed it at a certain date in July of that year.

Darkness would cover the earth.

The only light would come from candles blessed on the second of February, the feast of the Presentation of Jesus in the Temple, also known as Candlemas.

Of these candles one should have a certain number, seven, if I remember correctly.

To light them, one should use a certain brand of match.

But a gullible twelve year old living in the sixties in a quiet backwater found this a matter of serious concern.

I wasted no time in securing the seven candles, which fortunately someone had left lying about on the little altar in the house, and bought a box of matches, of the prescribed brand, and kept these items in a small buri bag which I hung on a wall in preparation for the time of darkness.

But when the day came nothing happened.

The end of the world has haunted the human mind.

Robert Frost even wrote about it in a short poem, “Fire and Ice”:

Some say the world will end in fire,

Some say in ice.

From what I’ve tasted of desire

I hold with those who favor fire.

But if it had to perish twice, I think I know enough of hate

To say that for destruction ice

Frost suggest that humans will bring about their own destruction, either through their desire (graspingness, rapacity), which fire symbolizes, or their hate (ill will, apathy, disregard), symbolized by ice (perhaps inspired by Dante’s Inferno, which portrays the biggest sinners in hell as bound in ice).

But what exactly happens at the end?

This is how Jesus describes it in the Gospel of Mark—the sun and moon will lose their light, the stars fall from the sky, the heavenly bodies unsettle and throw themselves off their orbits.

When we see these things happening, we should know the approach of the end, just as we know the coming of summer from the branch of the fig tree becoming tender and sprouting leaves, Jesus says.

The Son of Man will then descend from the clouds with great power and glory and send out his angels to gather those whom he has chosen from every point.

Nonetheless, only the Father in heaven would know the exact day and hour when all this will take place.

Scholars find Jesus’ words multi-layered, and allow that they can apply both to the destruction of the Temple in Jerusalem in the year 70 A.D. as well as to the end times.

Clearly Jesus calls for viglance, for such readiness as to make the time of the end unimportant.

If, as Robert Frost’s poem suggests, man himself will cause the destruction of the world through his hatred and his greed, if he succeeds in reining in his passions and rapacity, rather than a horrible and frightening thing, won’t Christ’s coming be nothing but the eternal sunshine of a glorious summer?