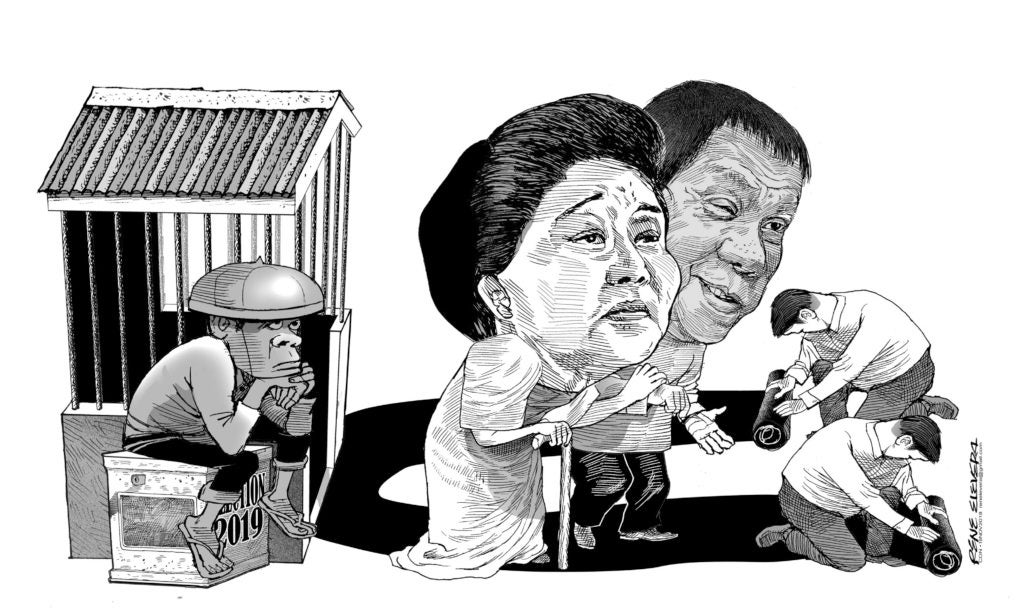 Somewhere out there, prisoners who are eligible for parole due to old age and sickness remain behind bars.

Rep. Imelda Marcos of the 2nd District of Ilocos Norte, recent convict on seven counts of graft pleaded with the court for light treatment, citing her advanced age and poor health.

Not long ago, Malacañang was raring to apprehend Sen. Antonio Trillanes IV even without a court-issued warrant of arrest.

The widow of the dictator Ferdinand Marcos, contemptuously failing to appear in court for her sentencing, took the opportunity to party on the night of her conviction, confident that an arrest would be delayed notwithstanding a court order and the gravity of the crimes for which she was found guilty.

Over the weekend, the nation was subjected to the spectacle of an interior and local government department hysterically objecting to a television program’s negative portrayal of police officers.

Not for the prompt arrest of Imelda, this hue and cry from the department that oversees cops and from the cops themselves.

“We have to consider the age and the health of Rep. Marcos in the manner we prepare and execute the arrest of the convicted person,” police spokesman Benigno Durana Jr. said.

There you have it: new factual basis for the fictional depiction of Philippine policemen as afflicted with double standards of harshness toward the weak and leniency toward the powerful.

The duplicity hints at tolerance of corruption among officials who otherwise would have inspired police haste in the arrest of Imelda.

When the President is an ally of the Marcos clan, when he would rather have the dictator’s son and namesake succeed him in case of resignation, nothing mystifies about the emasculation of the police in the face of her who stole from the Filipino people P12,144,825,000 to launder in corporations in Switzerland.

The lesson is clear. You elect persons who are beholden to the corrupt, you guarantee state susceptibility to remorseless official thieves.

Check with whom your favored May 2019 candidates rub elbows and exchange besos.

Ditch the vassals of those who steal.