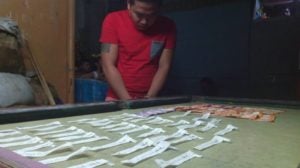 Noelito Literato, 27, got tired of his work as a delivery man and tried to open his own business.

But his new business involves the distribution of illegal drugs, the reason why he was arrested by personnel of the Drug Enforcement Unit of the Pari-an Police Staton led by Chief Insp. Kenneth Paul Albotra

Literato was collared in a buy bust operation in Sitio San Miguel, Barangay Lorega, Cebu City late on Tuesday afternoon for the possession of 39 small packs of shabu worth at least P12,000.

In an interview with Cebu Daily News, Literato said that he started his illegal drugs business in July with a capital of only P1,500.

He said that he would buy a small amount of drugs from his supplier and immediately sell these to his patrons to recover his capital.

He would also set aside a part of his earnings to support the needs of his wife and their only child.