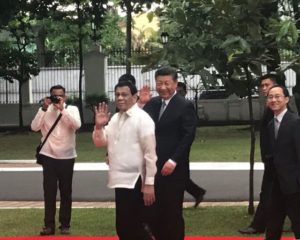 President Rodrigo Duterte takes Chinese President Xi Jinping on a tour of Malacañang upon his visit in the country.
Inquirer.net photo

The government owes us absolute transparency here,” Senatorial aspirant Lorenzo “Erin” Tañada III said on Tuesday after it was reported that the Philippines is expected to sign at least 20 “political and economic” agreements with China during the state visit of Chinese President Xi Jinping.

Tañada questioned the government’s intentions in these agreements, saying they must be forthcoming in the “intent and contents of these proposed agreements with China.”

“If they are telling the truth and they are protecting the Filipinos’ interests, then what have they got to hide? Surely there is no harm in disclosing contracts that are all above-board and will receive the people’s approval,” he said in a statement.

Tañada also said the government must exert more effort in defending the West Philippine Sea as the country’s sovereignty is different from China.

Senator Risa Hontiveros said Duterte must show the public that he can defend the country’s claims in the West Philippine Sea (WPS) during Xi’s two-day visit in the country.

Hontiveros added that Duterte’s tough-talking will be “empty bravado” if he allows China to endanger country’s ownership in the WPS.

“President Duterte likes to project himself as a tough-talking, strong leader. But all of this is empty bravado if he continues to kowtow before China and endanger our territorial integrity by doing nothing to defend the West Philippine Sea,” Hontiveros said.

“Now is the perfect time for President Duterte to demonstrate to the public what he is really made of. Dito masusubukan ang tapang ng Pangulo. Patuloy ba siyang magiging sunod-sunuran sa Tsina o magpapakita siya ng lakas ng loob para ipaglaban ang ating bansa at teritoryo,” she said in a statement on Tuesday.

Xi arrived in Malacañang around 4:50 p.m. for the official welcome ceremony.

He was greeted by Duterte and other Cabinet members.

Xi arrived in Manila before noon on Tuesday.

He landed at the Ninoy Aquino International Airport (Naia) at 11:30 a.m. after his trip to Brunei Darussalam.

He proceeded to the Palace after attending a wreath-laying ceremony at the Rizal Park in Manila.