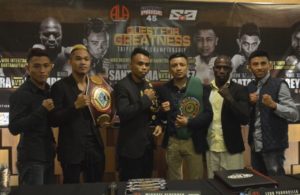 Protagonists in the Pinoy Pride 45: Quest for Greatness fight card together in a press conference at the Summit Circle Hotel. In the photo are (from left) KJ Cataraja, Albert Pagara, Jeo Santisima, Uriel Lopez, George Krampah and Hugo Reyes.
CDN PHOTO/CHRISTIAN MANINGO

Jeo “Santino” Santisima and Kevin “Jake” Cataraja know how important their upcoming bouts in the Pinoy Pride 45: Quest For Greatness on Saturday are.

They both know they have to win. And win big.

“One way to prove that I am ready for a bigger fight, much preferably for a world title, is to knock [my opponent] out,” said Santisima, who will defend his WBO Oriental Super Bantamweight title against Mexican Victor Uriel “Yuca” Lopez (13 win- 6 loss -1 draw, 6 knockout) in the main event.

Santisima, who is from Masbate, is looking for an impressive win that will put his name in the top 10 in the super bantamweight division. A knockout victory will surely get everyone’s attention.

“This is my first time to fight a Mexican and I’ve been longing for this chance,” added Santisima, who sports a 16-0-2 record with 14KO wins.

“I am also looking to win by a knockout because this fight is very important to me,” said the Tabuelan, north Cebu native who is aiming for his first regional title.

Aware of his opponent’s determination to win big, Lopez, in yesterday’s final press conference at the Summit Circle Fuente Hotel, remained positive on his chances against Santisima.

He believes that nobody is invincible inside the ring, and he proved that when he scored an upset KO win against then unbeaten Japanese prospect Ryo Matsumoto in 2016 in Japan.

“I am fully aware that my opponent is a good boxer but nobody inside the ring is invincible. I proved that in Japan. I did that before and I can do that again,” said Lopez.

Reyes and Lopez are also looking for a knockout since they believe it will be difficult for them to come out victorious via decision here in Cebu.