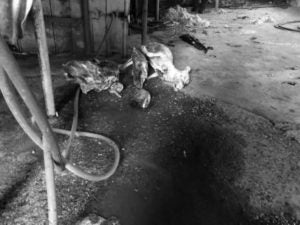 The Taepyeong-dong complex housed at least six dog slaughterhouses that could hold several hundred animals at a time.
/AFP

About one million dogs are eaten a year in South Korea, often as a summertime delicacy with the greasy red meat – invariably boiled for tenderness – believed to increase energy.

But the tradition has earned criticism abroad and has declined as the nation increasingly embraces the idea of dogs as pets instead of livestock, with eating them now something of a taboo among young South Koreans.

The Taepyeong-dong complex in Seongnam city, south of Seoul, housed at least six dog slaughterhouses that could hold several hundred animals at a time, and was a major source of meat for dog meat restaurants across the country.

The site will be cleared over two days and transformed into a public park.

It will be cleared over two days and transformed into a public park, Seongnam city officials said.

Read Next
Passengers asked to chip in for repair of airplane