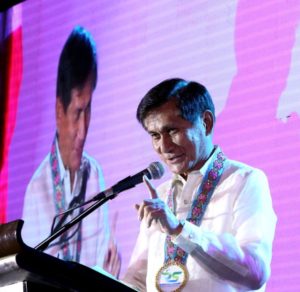 “WE WILL be solving the problem in Naga City because of the threat coming from ‘yong naiwan pang debris sa taas.”

This was the statement of Secretary Roy Cimatu of the Department of Environment and Natural Resources (DENR) as he promised to release the reassessment result of the Naga City landslides next week.

Cimatu said this would help mitigate the risk left by the killer landslide in Barangay Tinaan in Naga City.

Cimatu was in Cebu to speak before participants of the fourth International River Summit on Thursday.

The Environment secretary said they will ask the Apo Cement Corporation to put up remedial structures in the landslide area to prevent another disaster from happening.

“Certainly, babagsak ulit ito. So we have to do something,” he added.

Cimatu will also ask the company to clear the debris that fell and blocked the river.

He said he already discussed the reassessment result with Naga City Mayor Kristine Chiong through the telephone.

As to what happens to the landslide victims, the other evacuees and ground zero, will be determined next week as soon as the reassessment result is ready, said Chiong.

Until now, the over 7,000 evacuees from the one-kilometer radius in the periphery of the landslide are still waiting for clearance for them to return to their homes.

The City Government of Naga has been waiting for DENR’s advice as to who among the evacuees, who have been staying in the 11 evacuation centers for over two months now, will still be allowed to go home and who will be added to the initial 444 families who would no longer be allowed to return to their homes.

“I am glad that there is already progress on our request. I have been informed that the DENR has already acted on the hazard reduction plan of Apo Cement,” Chiong said.

Apo Cement Corp. has yet to issue a statement on the DENR’s recommendations on their hazard reduction plan.

The company spokesperson Chito Maniago was not available for comment.

Meanwhile, the P4.5-billion class suit over the massive landslide in Barangay Tinaan, Naga City, Cebu will still be raffled to a court.

Environmental lawyer Benjamin Cabrido, head counsel of the class suit, said they expect the case to be raffled by the Office of the Clerk of Court (OCC) of the Talisay City Regional Trial Court (RTC) next Monday, November 26.

Cabrido said they will request that the trial would still be done at the Naga City RTC so that the proceedings would be accessible to the landslide victims who stand as petitioners of the case.

Proceedings were halted last Wednesday, November 14, when Naga City (RTC) Branch 76 Presiding Judge Dennis Larrobis inhibited from the case, as petitioned by Apo Land and Quarry Corp. (ALQC), one of the respondents of the case.

ALQC asked Larrobis to inhibit from hearing the case and from deciding any appeal due to the latter’s alleged “close personal relationship” with Cabrido.