NEXT BATTLE: BOARD EXAM 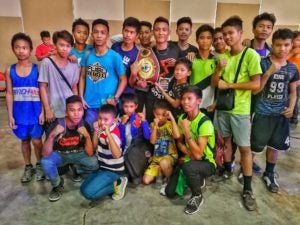 His hard work in training for his battle inside the ring paid off.
Unbeaten Cebuano boxer Kevin Jake “KJ” Cataraja showed he might be the next big thing in the Philippine boxing after the 23-year-old boxer from Tabuelan town, north Cebu, clinched the vacant World Boxing Organization (WBO) World youth super flyweight title by beating Mexican toughie Hugo “Scarface” Reyes in the undercard of Pinoy Pride 45: Quest for Greatness held at the IEC Convention Center last Saturday.

Now, Cataraja is getting ready for another fight. One that he feels is equally important as his boxing career.

This December 14 to 16, Cataraja, a criminology graduate from the University of the Visayas (UV), will be taking the Criminology Board Exams in the hopes of someday becoming a policeman.

“My next mission is to pass the board exam,” said Cataraja, who now sports a 9-0-0 (win-loss-draw) record.

For Cataraja, his thirst for being a world champion in boxing and being a cop is just the same. But he really wanted to make sure he finished his studies.

“I badly want to become a world champion in boxing but I also made sure to earn a degree so that I have a good direction and another career if ever I decide to retire from boxing,” Cataraja said.

KJ started his boxing career in 2015, and he managed to juggle his time with school and training well, finishing his course in 2017 while going undefeated in boxing.

But he admitted it was not easy. “I had to make a lot of sacrifices. It also took a lot of self-discipline to earn that degree.”

Just like balancing his time in school and boxing, Cataraja also said it wasn’t easy to manage his time between training for last Saturday’s fight and reviewing for his scheduled board exam this December.

“I spent two months reviewing while I trained for the fight but one month prior to my fight, I decided to momentarily stop my review and focus on my training because it’s a title fight. It was my chance to make my dreams into a reality,” said Cataraja. “It was not easy because your mind is divided between training and reviewing.”

But what kept him going was his family.

“This is not just for me. It’s also for my family. And I am very thankful to God for answering my prayers, finally I am a champion already,” Cataraja said.

There were also other factors which helped him pull off the victory last Saturday.

One was his late uncle, who passed away last February.

“He never missed my boxing matches even before I turned pro. He was one of the proudest people in our family because of my achievements,” he shared.

The other factor were his amateur boxers who cheered for him at the IEC Convention Center.

Cataraja actually trains young kids and turns them into amateur boxers by pitting them in various local boxing competitions around Cebu. In fact, he has his own team named after him.

“I let them watch my fight so that they can learn and be inspired to become a champion,” said Cataraja, whose family was also present during the fight.

Now, he will need more motivation for his battle ahead. But with the determination he showed that earned him the respect from ALA Boxing Gym trainers four years ago, it seems Cataraja is likely to succeed in this battle, too.

Especially when he is this confident.

“Taking the board exam will be very tough, but I believe I can pass it.”

TAGS: battle, board, exam, Next