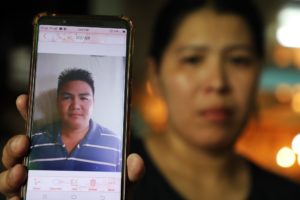 Two former policemen were the latest victims in the fresh incidents of violence in Talisay City on Sunday.

Initial police reports indicated that the victims were on board a motorcycle just outside of a mall along N. Bacalso Ave., Barangay Bulacao, Talisay City, shortly after 6 p.m., where they just had coffee, when a man approached and pumped bullets at them.

The two former policemen succumbed to multiple gunshot wounds on the head and different parts of the body.

Niebo Causon, 26, the son of slain ex-cop Causon, rushed to the crime scene and was still in a daze when he talked to reporters.

Earlier on Sunday, a jail guard was also killed by men riding on a motorcycle.

The death at dawn of Prison Guard 1 Jessie Castañares, a jail guard of the Cebu Provincial Detention and Rehabilitation Center (CPDRC), may have been rooted on illegal drugs again. He was the third CPDRC jail guard killed this year.

CPDRC Warden Reynaldo Valmoria, in a phone interview on Sunday, said the name of Castañares had been mentioned to him in multiple occasions due to his alleged involvement in “irregularities.”

The killing of Castañares was the seventh high-profile killing in the last four days that were all linked to the illegal drugs trade.

Police authorities, on the other hand, have still to determine the motive behind the slaying of Causon and Navales.

In the case of Castañares, Valmoria said drugs was again the likely motive, even as these cases were unrelated.

(As I see it, it brings us back to drugs as the motive in the killing because we can still trace his connection to Jerryfer Peregrino.)

Jerryfer Peregrino was the high-profile inmate of CPDRC, detained for drug charges, who was killed with two jail guards Bernie Bayutas and Joel Tevez while on their way to court last September.

Castañares, according to Valmoria, was suspended for two months in February this year along with Tevez and 10 other jail guards for “illegal activities.” Valmoria said the jail guards were suspended for alleged involvement in the proliferation of drugs and other contraband in the penitentiary.

(Since my assumption in office last May 24, he was neither a subject of a memo to explain nor was he referred to the Committee on Discipline and Investigation (CODI). I told them to forget their wrongdoings when I assumed office because I want them to have a fresh start.) 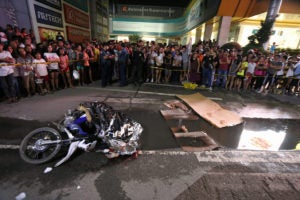 But the “clean” record of Castañares was short-lived.

Just three months ago, Valmoria said he received a text message from a police officer of Pardo Police Station asking for the background of Castañares because of reports of his alleged involvement in drug activities in the area.

(There was no formal inquiry because the question was only posed in a text message. The police asked me regarding his activities. He was our personnel but I don’t have a clear grasp of his activities outside.)

Valmoria also said he decided to station Castañares as an escort to detainees confined at the Vicente Sotto Memorial Medical Center (VSMMC) because he wanted him to be isolated from irregular activities inside the jail.

“In order to avoid them from being too familiar with their posts, I rotate them every two months. He was escorting inmates going out of the jail for court duties then I decided to put him there at the hospital to isolate him because I’ve heard rumors about him again,” Valmoria said in Cebuano.

At 11:30 p.m. on Saturday night, Valmoria said Castañares was present in his post, according to the report of the jail officer in charge of inspection.

(I am puzzled why he was there at Happy Valley when he was supposedly on duty. He was there during the inspection at 11:30 p.m. But at 2:30 a.m. I received a call that one jail guard was shot dead.)

Castañares, 33, was lifeless when responders arrived at the crime scene at corners Limkakeng and Happy Valley Streets in Barangay Guadalupe, Cebu City.

Senior Insp. Dexter Basirgo, the Guadalupe Police Station chief, said they received the shooting alarm at around 2 a.m. yesterday and found the body of Castañares bathe in blood.

“He was seen lying on his back facing upward at the center road,” said Basirgo.

Basirgo said Castañares was traversing the street when the suspects, riding in tandem on a motorcycle, suddenly appeared from behind and shot him several times.

The police were still trying to find out why Castañares was in the area when he was on duty guarding an inmate confined at the Vicente Sotto Memorial Medical Center (VSMMC) at the time.

“He was supposed to be in VSMMC as escorting guard of a confined inmate,” said Basirgo.

Basirgo said a witness who saw the shooting while driving his car en route to Barangay Labangon described the suspects as both males, both wearing dark jackets and riding a blue scooter.

Based on the report from the Scene of the Crime Operatives (Soco), Castañares sustained about 14 gunshot wounds on his body, mostly on his back.

Basirgo said that based on how the victim was shot, they are looking at personal grudge as the reason behind the killing, even as illegal drugs could be another reason.

Alice Castañares, the wife of the slain jail guard, said she had no idea who wanted her husband dead.

(He did not have any enemy. He did not receive any death threat. If you’ll say co-workers, he had good relationship with his colleagues.)

Alice said she would know about her husband’s activities as there were no secrets between them,

“Mosulti gyud na siya sa tanan nako. Wala na siya’y itago (He told me everything. He did not keep secrets from me),” said Alice.
Alice belied allegations linking her husband to illegal drugs, saying that Castañares was a very dedicated jail guard.

“Dili man gani na siya halos mo absent bisan nasakit na. Magsige pud na siya og overtime. So kung moingon ka trabaho, maayo g’yud na siya (He was rarely absent even if he were sick. He would often go on overtime. So it if were about his job, he was good at it),” said Alice.

In fact, Alice said, her husband had a flu on Saturday but still went to work.