Stop, look and listen the swanky Beeps are here 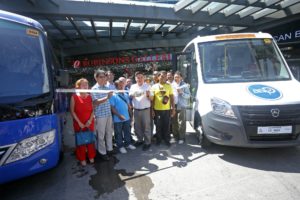 Be more observant when you are on the streets if you don’t want to miss the chance to experience firsthand any of the 40 new and ultra-modern public utility jeepneys (PUJs) which Cebu City will be rolling out starting today.

The jeepneys are fully air-conditioned, equiped with Closed-Circuit Television Cameras (CCTVs) and dash cameras and can accommodate around 30 passengers.

They appear more like mini buses hence the Beep logo on their sides which means bus-jeepney.

According to Land Transportation Franchising and Regulatory Board (LTFRB) Chairman Martin Delgra, Beeps are safe and convenient.

Delgra was in Cebu on Monday (Nov. 26) to formally launch the Beeps that will ferry passengers in two different routes in Cebu City.

“It is safe. It is convenient. It is predictable. We are looking forward to a more efficient public transportation,” Delgra told reporters.

Twenty units of the Beeps are painted blue while the other 20 are colored white signifying their routes.

The LTFRB has already issued a Provisional Authority (PA) to the drivers of the Beeps allowing them to ply the mentioned routes.
LTFRB – 7 Director Eduardo Montealto Jr., said today’s dry run will be offered free starting at 6 a.m.

But on Wednesday, Montealto said, passengers will have to pay the Beeps’ minimum fare of P8.50 to P9.

The higher fare, said Montealto, is due to the Beeps’ extra features.

Delgra also said that eventually, the Automated Fare Collection System will be implemented wherein passengers will only tap a card on a device instead of paying cash.

Meanwhile, lawyer Vigor Mendoza II of the Kilusan sa Pagbabago ng Industriyang Transportasyon (Kapit) said they would subject the drivers to more training especially on personal hygiene and being friendly.