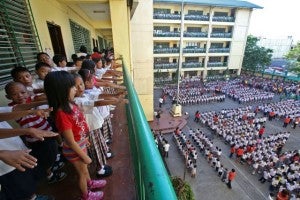 The Department of Education (DepEd) released on Wednesday an order that extends the Christmas vacation for elementary and high school for the current school year.

According to the order, the department ordered schools nationwide to start the Christmas break on December 15.

The start of Christmas vacation for elementary and high school students was initially set for December 22.

Despite the order, the department noted that December 15 would remain a class day intended for student activities.

“The Department of Education values the importance of spending quality time with the family,” DepEd said.

“The Christmas season provides an opportunity for Filipino learners to strengthen their emotional bonds with the family,” it added.

The date of the resumption and end of classes for school year 2018-2019 remained unchanged on January 2 and April 5 respectively, the DepEd noted.