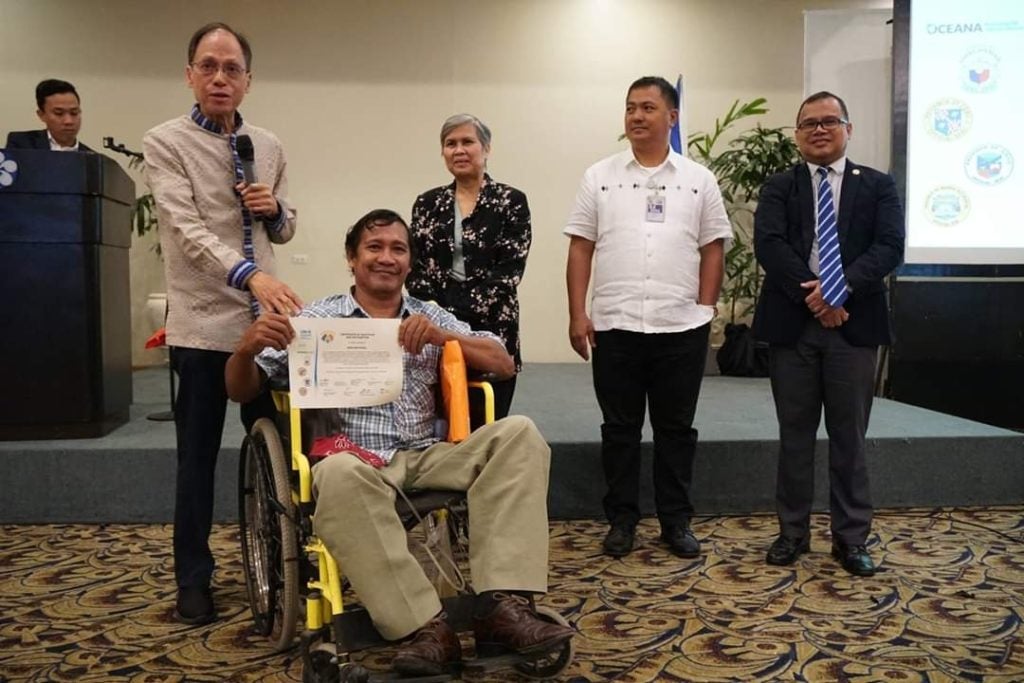 Things are much different now for the fisherfolk of San Remigio, a third-class municipality located in the northwestern part of Cebu.

Incidents of illegal fishing have dwindled and the town enjoys bountiful harvests from the seas.

In 2015, Pagal — then the Bantay Dagat officer of Barangay Anapog, San Remigio town — was shot in the back by still unidentified gunmen after attending a fiesta celebration.

Although he survived the ordeal, the bullet hit his spinal cord resulting to Pagal’s paralysis.

He has since been unable to walk; but this did not stop him from trying to protect the seas of San Remigio.

With the help of his binoculars and handheld radio, Pagal continued to watch the waters from afar contacting nearby seaborne watchmen in case anything fishy popped into his view.

For his unwavering dedication to their cause, Oceana Philippines recognized Pagal as “Ocean Hero” in 2016.

His work in protecting the seas, despite his disability, has also been an inspiration for other fisherfolk in the town.

San Remigio and those who used illegal means. Now, we’re very thankful we have pump boats),” he added.

Recently, Pagal gained international recognition as the only Filipino among eight individuals from different countries cited for their advocacy in addressing issues plaguing the world’s oceans this year.

He was recognized as Ocean Awards 2018’s Local Hero by Blue Marine Foundation, one of UK’s largest marine conservation groups and Boat International, a publishing house behind some of the world’s most prominent luxury and lifestyle magazines.

Ocean Awards has annually recognized people all over the world for their contributions in preserving the oceans and seas since 2014.

Environmental lawyer Gloria Estenzo-Ramos, vice president of Oceana Philippines, believed that recognizing their efforts was one of the best ways to empower ordinary fisherfolk.

“Even recognition from government is a big victory and joy for them. How much more if their names are mentioned, citing them for their efforts. These are precious gifts for them,” said Ramos.

For his part, Pagal vowed to continue the fight to protect and preserve San Remigio’s marine sanctuaries even if the biggest challenge right now for fisherfolk like him was passing on the responsibility as guardians of the seas to the future generation.

“Kasagaran namo karun, may edad na. Sila na sunod ang muatiman sa atong kadagatan ug hinaot gyud unta mas manindot pa nila (Most of us now are getting old. They’re the ones who will take care of our seas next and hopefully, they can do it better than us),” said Pagal.