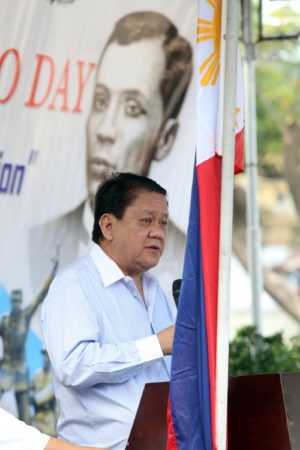 AGREE OF MILITARY PRESENCE ON CITY STREETS/NOV. 30, 2018: Cebu City Tomas Osmeña deliver his insperational message during the 155th Andres Bonifacio day, Mayor Osmeña also agree that military presence on the City streets as he is interview by media after his speach in Plaza independencia.(CDN PHOTO/JUNJIE MENDOZA)

Start young. This was the message by Cebu City Mayor Tomas Osmeña addressed to young adults in a speech he delivered for the celebration of the 155th Bonifacio Day yesterday.

Osmeña stressed the importance of the youth’s participation in community-building.

“In the past, we have very young leaders. Our culture does not really pay attention to the youth. This is something we have to reflect on,” said Osmeña.

He also urged the public to continually recognize the efforts of Gat Andres Bonifacio, who is also the father of the Philippine Revolution. “There are so many things we have to learn from our history but right now, let’s pay tribute to Gat Andres Bonifacio,” Osmeña said.

“It’s because of people like Andres Bonifacio now that we’re united. Let us not forget what it took him to make that decision. He was not an educated person. He was very poor but he stood up for something,” he added.

Yesterday morning, the Cebu City government, through the City’s Cultural and Historical Commission (CHAC), organized a simple, 30-minute ceremony to honor Bonifacio at the Plaza Independencia.