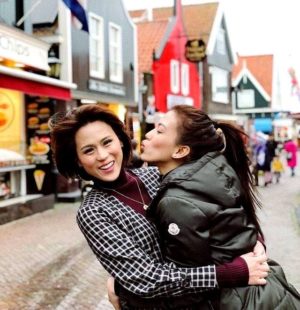 HOW would you feel if someone you loved in the past is now your sister’s fiance?

The official trailer of the Metro Manila Film Festival (MMFF) 2018 entry “Mary, Marry Me” was finally released on its Facebook page on Dec. 3.

The video starts with Mary Anne, played by Alex Gonzaga, arriving at the airport.

The video continues and showed Pete, played by Sam Milby, introducing himself as Mary Anne’s fiancee.

As wedding planner, Mary Jane was to help Mary Anne and Pete with the wedding details.

One day, Pete suggested to Mary Anne that they should change their wedding coordinator.

A confrontation happens between Mary Anne and Pete.

“Nilalandi ka ba niya kasi kakausapin ko siya. I can be the meanest,” she told Pete.

The sisters get into a fight after Mary Jane and Pete sing a song together.

“Mary, Marry Me” is the first movie of the Gonzaga sisters together for MMFF and a reunion movie project of Toni and Milby after “You Are The One” in 2006.

Directed by RC delos Reyes, the movie, which is produced by Ten17P and TINCAN, will hit Philippine cinemas on Dec. 25.

Other stars in the movie are Bayani Agbayani, Melai Cantiveros, and Moi Bien.