UAAP GAME 2 TO BE AIRED LIVE IN SM CITY CEBU 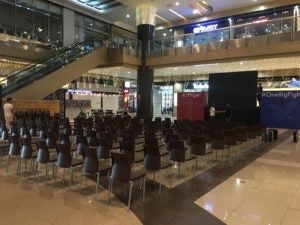 Great news to all UAAP basketball fans!
Cheer for your favorite team as SM City Cebu will hold a live streaming of the game 2 of UAAP live from the Araneta Coliseum on Wednesday.
The Ateneo Blue Eagles are looking to sweep the University of the Philippines Fighting Maroons in the UAAP Season 81 best of three finals series. Ateneo won the game 1 with a score of 88 against UP’s 79, held last Saturday at the Mall of Asia Arena.
Catch the live telecast of the UAAP Season 81 Men’s Basketball Finals game 2 at 3:30 PM at the Northwing Atrium of SM City Cebu.
Admission is free.
Read Next
WATCH: THE OUTLETS UNVEILS VIBRANT NEW LOOK!