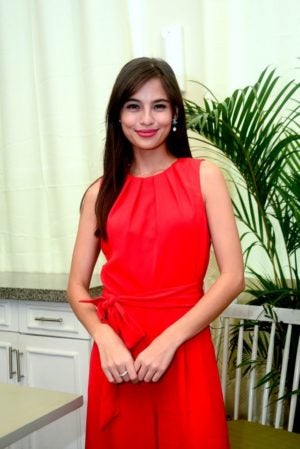 IT’S safe to say that Jasmine Curtis Smith is at the perfect place and time.

The passionate indie darling has gone through great unfolding, from 2013’s independent drama “Transit”—until her revelatory
performance in “Baka Bukas,” “I’m Drunk I Love You,” and “Siargao.”

Since her last TV appearance back in 2016, she (born Jasmine Casandra Ojales Curtis-Smith) has been out of TV projects and focused on movies.

The actress, dancer, endorser, writer, and TV host is back now in her new home network.

Expressing her enthusiasm, there is no stopping this young lady with her career’s carefully crafted slow-burn appeal as she’s back in Joel Lamangan-helmed primetime series, “Pamilya Roces.”

Here, Jasmine becomes a part of the unveiling of a family spectacle that’s funny and campy as it sets to make an interesting dramatic reflection of real life.

Moments before she stepped out with fellow actors for her primetime’s Cebu promo, Jasmine endeared herself to the Play! pool when she gamely answered questions about her foray as a serious actress, her first paycheck, and being safe and sound back in her home station.

“Pamilya Roces” delves into family and siblinghood. What are you like as a family member?

It’s like this— madami kasi kami, 10 kami, but kami lang talaga ni ate at ‘yung younger brother ko. Iba kasi ang experience ko sa kanila as a younger sister, separate as an ate sa younger brother, so parang there are two different versions of me as a sister. As the younger sister I am stubborn, medyo hindi makinig sa ate pero sunod-sunoran pag kailangan, ready to alalay anytime. And as an ate I can be controlling, like sundin mo ako o tuturuan kita o halika and I’ll tell you how to be the best. It’s the same with any ate or how my ate is with me.

How do you relate to your character?

‘Yung character ko as Pearl, I think I have many similarities with her character kasi ang pagiging ate niya todo-todo to the point that she has to stand up and be on the defense though wala pa akong incident like that with my younger brother. But what I can see is the similarity na kailangan kong i-emulate is ‘yung pagka-ate ng ate ko, doon ko nakikita ‘yung similarities that I can bring to the table. Wala masyado sa akin but more from my ate.

What’s the vibe like on the set working with Direk Joel Lamangan?

This is your first TV project in GMA. Did you request to be part of something dramatic?

Not naman nag-request. More of like parang if mabibigyan niyo ako ng project sana po it’s drama. TV is a different kind of game and for us actors hindi namin ito platform, we are a tool to be used for TV so it’s kind of mahirap mag-demand.

But you’re open to working for different genre?

If anything comes my way that is well-prepared, hindi kakapusin while it’s on air, hindi ‘yung tipong maganda lang ‘yung first two weeks ng fantaserye and the last three is medyo kapos ka na, you know. Then again it should be a good project.

Do you also watch other TV programs?

You have been in the industry for quite a while. Do you remember what you bought with your first paycheck?

My mom’s car. Other than that because that’s the reason why I joined talaga because gusto ko na siyang bilhan ng car kasi at that point nasa fourth year high school ako nuon at parang tirik nang tirik ‘yung car namin at third-hand car na ‘yun and it was costing more as it hasn’t been repaired than to buy a new car. So I asked my dad na if I start working will you cover the other quarter of the payment tapos ako na ‘yung three quarters. That was my first grand spending, but other than that ‘yung para sa akin naman is I bought myself a pair of RayBan sunglasses na favorite ko pa rin hanggang ngayon. 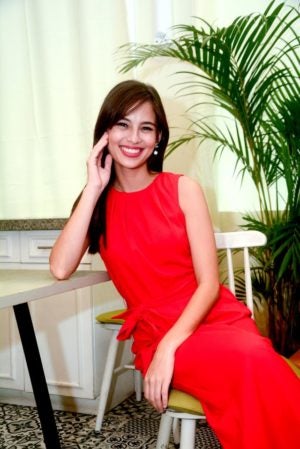 I know! (laughter) I am so happy that I have this. I just had it this year and I consider this as a gift for myself.

How would you describe your fashion?

I feel like my personal style is more relaxed, easy, comfortable pero at the same time clean.

I want to be in a movie that’s somewhat similar to “Eternal Sunshine of the Spotless Mind,” something like that. The character of Kate Winslet, of course. It’s like parang alam mo na pag napanood mo ‘yung film, it just sticks in your consciousness from the first time you watch it, it never leaves you.

If you were not acting, what would you be doing now?

What projects have you made that you will never forget?

“Siargao,” “Baka Bukas,” and “Transit.” I have to include “Transit,” my first indie film, and that was the first time I won an acting award outside of TV so I felt like I built my backbone from “Transit.” And by doing “Baka Bukas” and “Siargao” only confirmed that I am doing well and I am choosing the right path.

Are there local actors that you look up to?

Definitely Iza Calzado and Irma Adlawan. For Iza, because I feel like her route is different from many of her contemporaries. Even including myself, it’s so nice to see na what I want to emulate she’s already kind of doing and she’s already done it. So I want to be able to somehow establish something similar in the future or work with her on something. And Miss Irma Adlawan because I felt like siya talaga ‘yung nagturo sa akin kung paano and
totoong pag-arte without really having to teach me.

How do you want to see your career take off in the next five years?

Sana lang I can keep doing what I am doing now na napagbalanse both film and TV. I want to be able to contribute to the industry by producing something, hopefully by writing or in guiding sa story like a creative producer. Other than that I want to be able to set my life so that I can find
balance between having to work in the showbiz industry and at the same time have a life outside in the business world, and in the beach world. Alam mo ‘yun na parang ma-incorporate ko yung “life.” Kasi it’s different that you have the “life” while you’re working.

My mom, definitely her. Lahat, anything related to her is my weakness. Everything that she wants,anything that hurts her, anything that makes her happy. Mabilis akong maawa sa aking aking mama. Anything para sa kanya, okay go.

What are your aspirations for next year?

What’s your current state of mind?