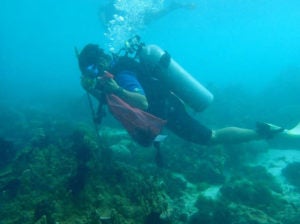 Police officers turned “scubasureros” for a day and helped collect 250 kilos of trash at the seashore, on and under the seawaters of Santander, Cebu’s southernmost town which is 134.14 km from Cebu City.

This happened last Saturday (Dec. 8) when 10 police officers from the Santander Police Station changed their police uniforms with wet suits and diving gear to do a coastal cleanup in the town called the Oplan Kalikasan: Coastal Cleanup also known as “Scubasurero.”

Senior Insp. Margienette Yosores, Santander Police Station chief, said in an interview with Cebu Daily News on Sunday (Dec. 9) that the police divers joined more than a hundred volunteers and five dive masters from private resorts in the town for the “Scubasurero” campaign.

She said that most of the garbage they collected were tires, plastic wastes, and bottles.

(We collected so many plastic wastes like sachets of shampoo, coffee, plastic bags, bottles of beer, and other alcoholic beverages. We were also able to collect tires which already have small oysters attached to them.)

Yosores said that this was the second coastal cleanup they did this year — the first being last May.

The police officers, who joined the “Scubasurero” drive on Saturday had undergone free scuba training and seminars from expert divers from the town’s resorts.

(Our personnel had undergone scuba seminars and trainings every Friday in the past months to prepare them for this cleanup drive because we also would want to clean not only the seashore but also in the deeper part or middle part of the sea.)

Yosores, who is a licensed scuba diver, said that the sea had always been close to her heart and that she would want the coastal cleanup to become a regular activity of the police station.