Palma: Remember those who went through Tokhang 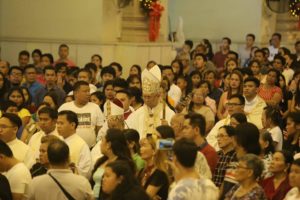 CEBU CITY, Philippines- Cebu Archbishop Jose Palma called on the faithful to remember the drug surrenderees and the poor this Christmas.

In his homily during the Christmas eve Mass on Monday (December 24) at the Cebu Metropolitan Cathedral, the prelate said that in celebration of the birth of Jesus Christ, the faithful should not forget those who live in the outskirts of society, including the drug surrenderees.

Under Tokhang, hundreds of suspected drug users and pushers across the country were jailed after failing to heed warnings to stop their involvement in the illegal drugs trade.

The drug war has also claimed the lives of at least 3000 persons.

The prelate also reminded the Cebuanos to be grateful for the blessings that the year has brought despite the challenges Cebu has faced.

On Thursday (December 20), the archbishop officiated a Mass at the Cebu City Jail with at least 5,000 inmates.

Palma encouraged the inmates to stay firm in their faith and hoped that their lives can change.