Sykes back in E-Leagues for Basketball Finals 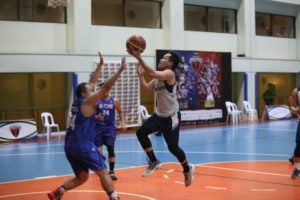 The Accenture Sharks’ Sherwin Resilla had a huge double-double in their Game 2 win that tied the semis series up against the Converters at 1-1. Contributed photo

Cebu City, Philippines – After a long 15-year absence, the Sykes Pioneers find themselves back in the finals of the 2019 Tanduay Athletics E-Leagues for Basketball.

The Pioneers returned to the championship round after disposing the Teleperformance Vipers, 68-49, in Game 2 to sweep the semis in the Elite Classic division on Sunday (January 6, 2019) afternoon at the City Sports Club-Cebu.

The Pioneers ousted the Vipers in impressive fashion, doing it without main man Janjan Auditor, who sat out a huge part of the game after suffering a sprained ankle in the first quarter.

With its top gun on the sidelines, Sykes did not get fazed as it still had a former Cesafi All Star and two other Cesafi studs in its stead.

In the other semis pairing, the Accenture Sharks recovered and knotted the series up against the defending champions Converters with a 68-46 rout in Game Two.

Forward Archie Brian Vincent Batua, who was held to just two in Game One, bounced back in style as he piled up 19 points to go with four boards, three steals and two assists.

Sherwin Resilla was just as dominant against his former team as he finished with 10 points, 16 rebounds, two blocks and a steal. /bjo