Organizers mull another ABL game in Cebu in February 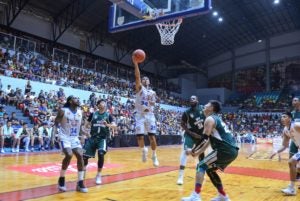 If plans do push through, Alab Pilipinas guard Ethan Alvano, seen here driving into the teeth of the defense of the Zhuhai Wolf Warriors, will return to Cebu with the rest of the team to play against the Saigon Heat. /Contributed photo Ron Tolin

Cebu City, Philippines – Fresh off the success of Cebu’s hosting of the San Miguel Alab Pilipinas’ game versus the Zhuhai Wolf Warriors on Sunday night at the Hoops Dome in Lapu-Lapu City, team owner Charlie Dy bared that talks are already underway to have the February 3 game against the Saigon Heat held here again.

With the home crowd engaged on every play, the Alab Pilipinas got the lift it needed to drub the Wolf Warriors, 105-95, and improve their win-loss record to 5-0.

The Alab Pilipinas still has eight more games to play before the aforementioned February 3 game comes around and it remains to be seen if that match against a Heat team being bannered by world imports, Trevon Hughes, Kyle Barone and Murphy Burnatowski will eventually be held here in Cebu.

The game’s organizer, Batang Gilas team manager and Cebu-based businessman Andrew Teh, said that he is still working on making it happen. /bjo