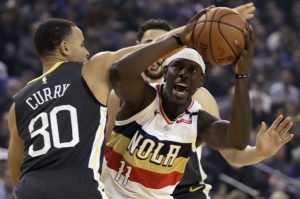 Pelicans star Anthony Davis went down hard beneath the Warriors basket with 2:22 left but was able to walk off after a few minutes and quickly returned. Davis had 30 points, 18 rebounds, seven assists and three blocks in nearly 41 minutes for New Orleans, coming off a 46-point and 16-rebound gem Monday night despite starting 0 for 5 with just four points in the first quarter. Nikola Mirotic scored 29 points, Jrue Holiday added 25 points and seven assists while Elfrid Payton dished out 12 assists.

The Pelicans and Warriors combined for an NBA-record 43 3s, breaking the mark by two that Sacramento and Golden State accomplished Jan. 5 at Golden 1 Center.

Kevin Durant hit a key 3-pointer with 5:53 to play and finished with 30 points and 15 rebounds, while Klay Thompson scored 19 points with four 3s. Draymond Green had two

Curry has 28 3-pointers in his past three games while the Warriors made 18 or more from deep in a franchise-record fourth straight game.

He scored 23 of his points in the third quarter, hitting four 3s over the final 2:37, as the two-time defending champions rallied, taking a 110-109 lead into the fourth after Andre Iguodala’s driving finger roll and ensuing free throw.

Golden State found its rhythm in the second half playing the second night of a back-to-back. The Warriors won 142-111 at Denver on Tuesday night and this was their lone day at home during a grueling 17-day stretch, with seven of eight games away from the Bay Area. Golden State won’t play at Oracle Arena again until Jan. 31.

On Friday at the Clippers, All-Star center DeMarcus Cousins is scheduled to start and make his Warriors debut for his first game in nearly a year since tearing his left Achilles tendon and undergoing surgery.

The Warriors were hardly as sharp initially as they were a night earlier, but it would have been tough to match that 51-point opening period at Denver.

They hit 10 of their 21 in the first quarter alone Tuesday.

“I’m tempted to just write on the board, ‘Just do what you guy did last night’ and not say anything else,” coach Steve Kerr quipped before the game. “I know we can’t always shoot that way. That was a special night and we were in the zone.”

Golden State began 5 for 9 Wednesday making 3 of 4 3s, two by Durant, for a quick 16-11 lead. The Warriors then went 7 for their next 23 before Thompson’s 3 midway through the second and chipped away at a 17-point deficit to pull within 71-66 at halftime.

Read Next
The making of a Sinulog Festival Queen