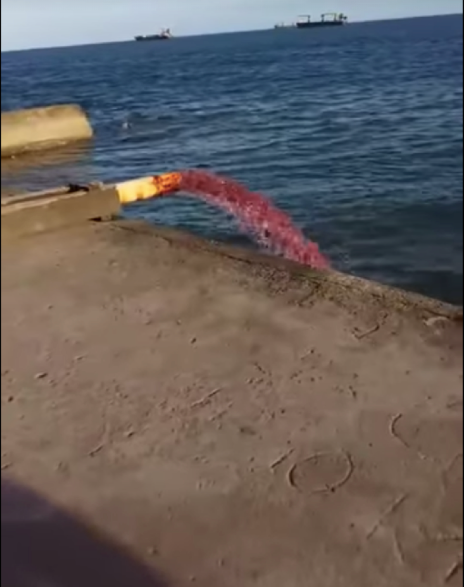 Barangay Dumlog, Talisay City residents are worried about this “suspicious red water” coming out of a pipe being discharged to sea near their homes. Photo is a screenshot of the Louisleonard’s video, which went viral.

CEBU CITY, Philippines — Some residents in Barangay Dumlog, Talisay City have requested the help of experts from the Department of Environment and Natural Resources (DENR) to investigate and find out what these residents described as “suspicious looking water” from a pipe which was being discharged directly to the sea surrounding their houses.

A video of red-colored water coming out of a metal pipe being discharged to the sea in the coastal village of Dumlog, Talisay City went viral today, Thursday (January 17).

It was captured and posted by Facebook user Louisleonard. As of 6:15 p.m. today, the video was shared over 16,000 times on Facebook.

Louisleonard, who requested to speak in anonymity, told Cebu Daily News Digital that she already notified the office of DENR in Central Visayas (DENR – 7) about the matter.

However, she said the strange looking water did not emit any odor.

“But this is the first time that we chanced upon something like this near our homes. We just passed by the area and saw this suspicious-looking water being discharged to the sea,” Louisleonard said in Cebuano./dbs