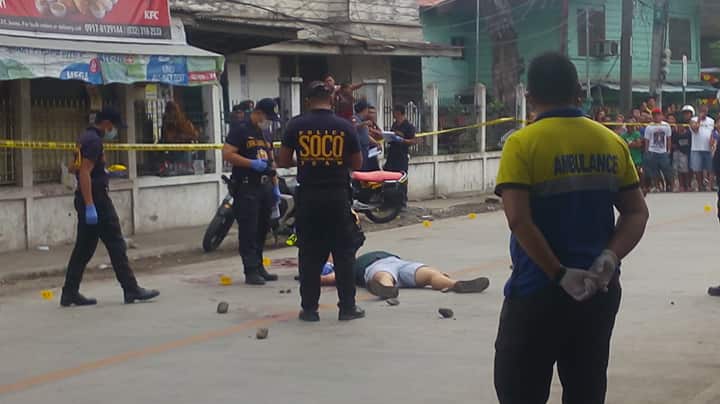 CEBU CITY, Philippines—Chief Inspector Eduard Sanchez, the commander of the Abellana Police Station of the Cebu City Police Office, has launched a hot pursuit operation against the four remaining suspects involved in a family feud killings in Barangay Sambag I, Cebu City on Monday morning, January 21.

Sanchez said that only one of the five suspects involved in the incident has been detained by the police.

The confrontation led to the deaths of Edwin Bacaltos, 58,  and his son Shaun, 23; and of their nemesis, Vanzant Navales.

The incident happened past 6 a.m. outside the Bacaltos house after an armed Vanzant and his brother Vincent, in the company of several other men, arrived in the area to confront the Bacaltos family.

The footage of a short video related to the incident that was  furnished to Cebu Daily News Digital showed  a shirtless man believed to be Edwin Bacaltos coming out into the street, also holding a firearm. He was yelling at the Navales brothers, with a person said to be Vanzant pointing a gun at him.

A second video, a copy of which was also furnished to CDN Digital, showed the Bacaltos family members in a frenzied state trying to transfer the wounded Edwin Bacaltos into a car,  while a blooded Vanzant was lying  face up in the middle of the street. Shaun was lying on the sidewalk with a wound in the head.

Now in detention is  Michael Bacaltos, the elder brother of Shaun, who reportedly admitted to the police that he was the one who shot Vanzant after he saw the latter shoot his father Edwin.

Vincent was reportedly wounded when he fled the scene together with three other unidentified suspects on board a red vehicle, leaving behind his brother Vanzant.

Vanzant died on the spot while Edwin and Shaun were brought to a hospital, where they were declared dead on arrival.

Sanchez said they were  looking into the nearby hospitals in the city to check if Vincent had admitted himself for treatment.

Sanchez said that they received information that Vincent has sent surrender feelers but it has yet to be confirmed.

According to Sanchez,  the feud between the Bacaltos and Navales families wentback to five years ago and was rooted in a love triangle between Shaun and Vanzant and an unknown woman.

(Shaun and Vanzant used to be very close friends. They were often seen together in gatherings. But they became rivals over a woman and it resulted to them turning into enemies.)

“Pero ato pa palawman ang imbestigasyon kay almost five years na ilang pagbingkil (We will dig deeper into this case since their feud has been going on for five years),” said Sanchez.

According to initial police investigation, the feud between Shaun and Vanzant escalated to a point that it already involved the members of their respective families

It even reached a point when the Bacaltos family decided to turn to the barangay government to lodge a complaint against the  Navales family.

Sanchez said that Michael may be charged with either murder or homicide for killing Vanzant. The same charges may also be filed against Vincent and his three companions for the killing of Edwin and Shaun. /elb