Province to PDEA-7: Exert same effort in deterring party drugs as with shabu 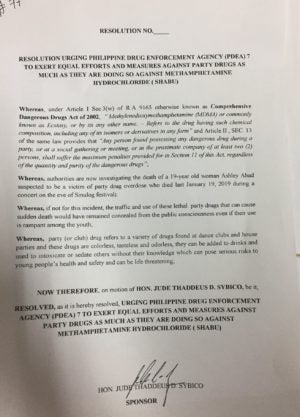 CEBU CITY, Philippines —The Cebu provincial government has asked the Philippine Dug Enforcement Agency in Central Visayas (PDEA-7) to exert equal effort in deterring the proliferation of party drugs as much as it is doing against ‘shabu.’

The Provincial Board (PB) unanimously carried a resolution authored by Majority Floor Leader and Fifth District Board Member Jude Thaddeus Durano-Sybico, calling on the anti-narcotic agency to create measures to combat party drugs and to create public awareness on its lethal effect. It asked the agency to treat party drugs the same way they treat shabu.

The resolution was passed in the wake of the death of a teen who was suspected to be a victim of party drug ingestion during a pre-Sinulog concert at a business center in Cebu City.

Read: Ashley Abad: The bright, bubbly girl who can sparkle no more

“If not for the incident, the traffic and use of lethal party drug that can cause sudden death would have remained concealed from public consciousness,” Sybico’s resolution read.

The family of Ashley Abad, the 19-year-old who collapsed while attending the pre-Sinulog party and passed away the following day, has agreed to subject the teen’s body to an autopsy to determine the cause of her death.

Abad’s death has drawn the attention of the public amid rumors that she died of unknowingly drinking a beverage mixed with liquid ecstasy during the party.

Cebu City Police and PDEA-7, the agencies that have taken charge of the investigation, have yet to confirm the cause of Ashley’s death.

The teen was laid to rest on Sunday, January 27, while her family continues the call for justice for her death. /bjo