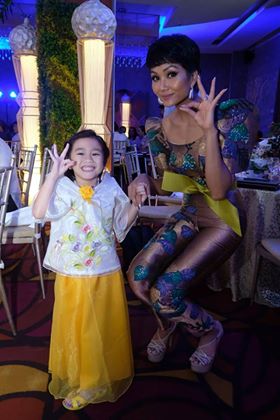 Miss Universe Vietnam H’hen Nie with fan Freyja “Duday” Nobleza, 5, during the beauty queen’s visit in Naga City, Camarines Sur on Feb. 2, 2019 where she was the guest of honor in a youth congress. | Contributed Photo by
Ray Nobleza

CEBU CITY — Miss Universe Vietnam H’hen Nie has earned a fan in five-year-old Freyja “Duday” Nobleza during the beauty queen’s visit in Naga City, where she was the guest of honor in a youth congress.

Duday’s father, Ray Nobleza, was one of the speakers at the National Youth Congress held on Saturday, February 2, at the Jess Robredo Coliseum in Naga City in Camarines Sur.

As the beauty queen’s new pal, Duday got herself an autograph photo of Miss Universe Vietnam with the words: “Love you so much Freyja.”

The beauty queen signed the photo with a heart and her name and title.

“They were together this morning. Then at lunch. Then kanina sa event. Then tonight sa appreciation dinner,” Nobleza told CDN Digital on February 2.

The girl was clearly elated in the photos with Miss Vietnam. 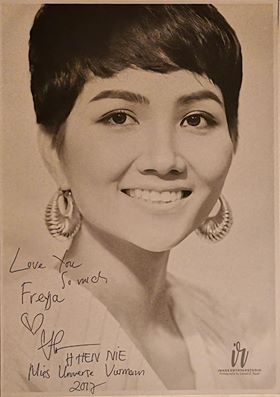 The beauty queen was in Naga City as a guest of honor in the National Youth Congress organized by the Francis Padua Papica Foundation Inc. It was attended by at least 12,000 students from all over Bicol region.

Nobleza, who was born in Naga City but has been a resident of Cebu since 2005, said he brought along his daughter to the congress so she can meet different types of people.

Nobleza said he showed pictures of the other guests to Duday and told her about them even before they left Cebu. “I want her to see that everyone is just human, regardless of title. Duday relates to everyone the same way,” he told CDN Digital.

Nobleza said Duday approached the beauty queen and told her, “I am your biggest fan.” The two then became instant best friends. 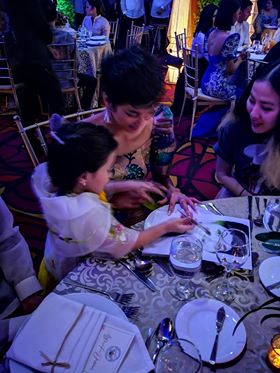 In the event, Duday also met other celebrities including Maria Venus Raj, Franco Laurel and Vince and Patricia Hizon during the appreciation dinner at the Avenue Plaza Hotel in Naga City.

Miss Vietnam is well loved by Filipinos after ending as one of the Top 5 finalists in the Miss Universe 2018 pageant in Bangkok, Thailand where Miss Philippines Catriona Gray emerged as the winner.

Her humble past as a former domestic helper earned the respect and admiration of Filipinos. Her coach, Bicol-based Anjo Santos, was also the trainer of beauty queen Miss Universe 2010 fourth runner-up Maria Venus Raj./elb

Read Next
Mary Ann Castro in the eyes of her family: ‘She wanted to die beautiful’