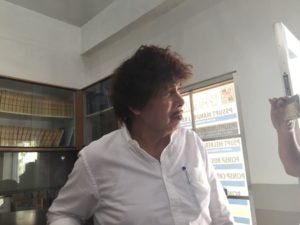 On Monday, February 4, 2019, Feliciano submitted himself to the Cebu Provincial Police Office (CPPO) for questioning after his name surfaced in the investigations of the special investigation task group (SITG) formed to solve the Reluya ambush case.

“I’m going to voluntarily submit myself to the investigation. That is why I’m here because I want to clear my name because I have nothing to do with that incident. My conscience is clear so there is nothing to be afraid of,” Feliciano told reporters before proceeding to a closed-door meeting with the police.

Feliciano’s name surfaced after the police said that they are looking at politics as a possible motive in the ambush.

Feliciano said he will cooperate with whatever investigation the police may conduct in order to clear his name.

Aside from Feliciano, a certain Neil Enriquez was also invited for questioning.

A post in Enriquez’ Facebook page said that involvement in illegal drugs is behind the Reluya ambush and the other previous killings of San Fernando town officials.

Feliciano also maintained his belief that drugs are behind the ambush attack against the group of Mayor Reluya.

Read: LMP-Cebu asks police for a speedy probe into the Reluya ambush case

Senior Superintendent Manuel Abrugena, director of the Cebu Police Provincial Office (CPPO), however, clarified that their meeting with Enriquez and Feliciano does not mean they are persons of interest in the case.

“They are part of the investigation but not persons of interest. Naimbitahan lang natin sila dahil nababangit ang mga pangalan nila during our investigation. With what we have discussed, we cannot disclose it yet because the two (Feliciano and Enriquez) requested that the information that they have given will be treated with confidentiality,” Abrugena said.

Abrugena said the statements of Feliciano and Enriquez can help them move forward with the investigation but they cannot be used in their investigation files since these were made without the presence of a legal counsel. /bjo